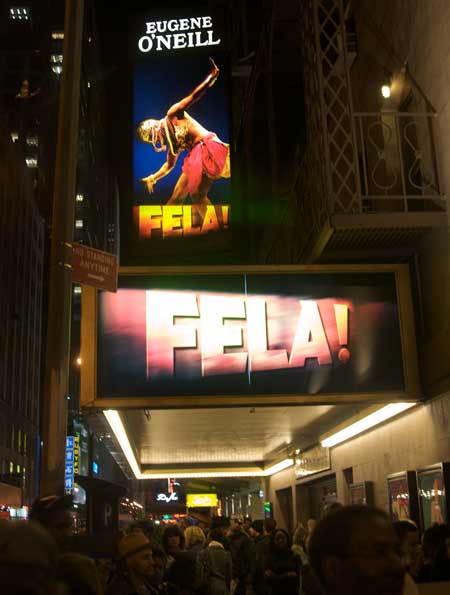 Whether you are walking or driving in Times Square, the gridlock can feel as if you are going to a United Nations Summit.  The electricity from the flashing lights and projection screens places you are on another planet, but when you walk into the Eugene O’Neil Theater you are transported into time.

After passing through the doors you are no longer in modern day New York City, you are whisked to Lagos, Nigeria.  Pictures of black leaders adorn the walls colored in rainbow hues.  The espiritu of the Orishas openly gather like spectators at a coming out party.   It is the time of bell bottoms and dashikis and on the continent of Africa Afrobeat is being brought to the masses.  Who is pied piper you ask, the black president of course, not Barack, but Fela Anikulapo Kuti.

On Broadway the spirit and long overlooked legacy of Fela Kuti is being resurrected through Fela! The Musical, courtesy of director Bill T. Jones.  From the opening curtain to the last one, Fela!  The Musical leads the audience through a high energy journey that follows a particular time in Fela’s life.  The musical takes place in the Shrine, Fela’s famous club in Lagos.   It may his final performance, as he is contemplating leaving Nigeria six months after the brutal murder of his mother, played by Lillias White, by the hands of government soldiers.  His existential crisis is explored through the number “Trouble Sleep.”

Like the actual performances held at the Shrine, Fela, brilliantly portrayed by Sahr Ngaujah, interacts with the audience through his music, testimonials to the corruption in Nigeria and storytelling.  The play tells the story of how Fela came to be the originator of Afrobeat, focusing on his influences like the Yoruba religion and artists like James Brown and John Coltrane.  It takes the audience back to Fela’s friendship with Sandra Isadore, played by Saycon Sengbloh, a relationship that spawned Fela’s awareness of self.  This awareness was brought to life in the number “Upside Down.”

Fela began to reflect this awareness in his music and took it back with him to Nigeria from abroad and it is of course Fela’s music that is the highlight of this production.  For the majority of the people Fela! The Musical will be their first introduction to Fela’s music, but for me this musical is a homecoming.  As a devout househead, Fela is one of our high priests; his music is extremely influential to our community and music.

My feet were moving to Fela’s feverish horns, African rhythms and powerful lyrics way before I knew about the man and the sacrifices he made for his beliefs.   At times it was torture to remain seated while watching numbers like “Zombie”, “Expensive Shit”, “I.T.T. (International Thief Thief)”, “Yellow Fever” and “Water No Get Enemy”, some of my favorite Fela tunes.  I wanted to get up with the rest of the cast, gyrate and move my feet in praise of the black president.

The choreography was magnificent with footwork; pelvis grinding and aerial moves that remind me of the incensed lit, baby powered dance floors I spin on and dance circles I revolve in.  In fact, everything about the musical feels authentic.  The use of multimedia helps to guide the audience deeper into Fela’s world.  Sahr Ngaujah is perfect as Fela Kuti.  Sometimes I thought he was Fela; the extensive research he did for the role paid off.  He delivers a performance that is worthy of a Tony nomination and win.

The most powerful point in the play is the recreation of the raid on Fela’s compound.  “The Storming of Kalakuta” was one of the most compelling dramatizations I have seen on stage.  The impact of the barbarous acts committed on that day was not lost on the audience although the scene was not visually graphic, yet the visions were still seared into your mind anyway.  Fela! The Musical is a tour de force in American musical theater, long live Fela Anikulapo Kuti.