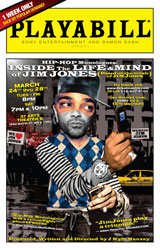 Women had The Vagina Monologues; thanks to Jim Jones hip hop heads have their own soliloquies.  Hip Hop Monologues: Inside the Life & Mind of Jim Jones first debuted off Broadway in 2008 and had a brief revival in March.  It was a theatrical listening party of sorts as it featured singles from his album Pray IV Reign.  The play appears to be an autobiographical account about Jim Jones.  Playing himself, Jim Jones returns to Harlem to take the audience through different sequences of his life –relationships with his baby’s mom, fake friends, the police and himself are all examined.  Ultimately Jim has to decide if he should give his street life.

Director J. Kyle Manzay makes great use of the stage blending props and multimedia to give the audience the ultimate Harlem experience.  When I think of Harlem, I think of a place where cats are always on the move, even when they are sleeping they are looking for ways to make moves.  Hip Hop Monologues: Inside the Life & Mind of Jim Jones moved and Harlem shook from beginning to end.  It is a cleverly crafted showcase of an artist who is definitely on my top ten best rapper list.  My sincere hope is that more productions like it will be debuting in the decade to come.