My earliest memory of Lou Reed was hearing his music and saying, “I wanna write like that.” His voice…his poetry – it’s artistic perfection.  When I heard of Lou Reed’s passing, I was devastated.  We want our artistic heroes to be immortal but our flesh doesn’t work that way.  It wrinkles, it ages, it fades and dies.  Thankfully we have his music, brimming with energy and moments accompanied by sound. I would like to share some of my favorite Lou Reed songs.  After all his music tells his story better than I ever could.  RIP Lou Reed! 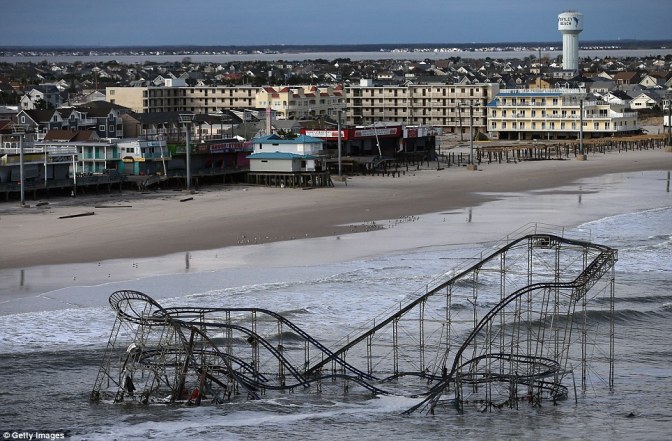 Last year this time I had no electricity.  I was disconnected from family, friends and the entire world.  I was on the road maneuvering around downed trees and power lines, searching for non-perishable food to feed my parents and myself as well as gas to feed my vehicle. Anxiety was starting to settle in; my gas gauge was at a quarter of a tank and I had no idea when the gas trucks would arrive.  Darkness was descending and my Blackberry’s battery life was dwindling.  It had been a long time since I had been frightened on Halloween.  I felt as if I was starring in my own post-apocalyptic drama.

When Sandy hit the NYC-Metro area I, like many others, was ill-prepared.  I heard the warnings but I didn’t take them seriously.  I didn’t run out and stock up on canned goods, candles and water.  This is NYC and New Jersey I thought, we’ll be fine.  Around 8:30 that evening my home went dark.  From my windows I watched the transformers blow one by one, sparking electric flashes of blue light.  One by one I watched as the surrounding blocks and homes in my neighborhood lost the life source of the 21st century.  As I stared into the candlelight illuminating my bedroom, wondering what time it was, I was suddenly humbled by the tremendous power of Mother Nature.  Two days after Halloween, the lights in my house came back on and I was able to view the full devastation of what Sandy had left in her wake. I was thankful that Sandy only cost me a few days of inconvenience, but horrified and saddened to see and hear the stories of those who had lost everything.

As the anniversary of Hurricane Sandy approached a feeling invaded the air, it was almost palpable.  A year later and many of us have had the opportunity to go back to normal.  For some the ghost of Sandy still lingers, still possessing a stranglehold on their lives.  Recovery is slow going but I stand firm in the belief that those who were severely affected by the storm will receive the resources necessary to rebuild.  One thing I know about this area is we may get knocked down, but we get back up better than before.

A Time to Kill has been captivating audiences for over 20 years.  The novel, which eventually became a best-seller, was first published in 1989.  In 1996, Matthew McConaughey, Sandra Bullock, Samuel L. Jackson and Kevin Spacey starred in the film version.  Adapted for the stage by Tony award-winning playwright Rupert Holmes, A Time to Kill explores the undercurrent of race in our justice system.  A 10-year-old black girl is savagely raped, beaten, almost lynched and left for dead.  The two perpetrators are shot and killed at the courthouse by the girl’s father, Carl Lee Hailey.  Hailey is arrested and charged with first degree murder sparking tensions that had bubbled underneath the surface of a Mississippi town and subsequently gained nationwide attention.   Hailey hires Jake Brigance, a white attorney, as his defense lawyer.  Receiving advice from his disbarred mentor and much needed assistance from a pushy Bostonian intern, Jake begins to build an insanity defense for Carl Lee, while receiving death threats from Ku Klux Klan.  In court he tangles with Rufus R. Buckley, a superstar district attorney on his way to the governor’s office.  And while explosions erupt in and out of the courtroom, Jake uses an impassioned plea to get the jury to acquit Carl Lee.

The plot of A Time to Kill is well-known, it’s robust and meaty.   I liken Rupert Holmes’ A Time to Kill to a fillet – some parts are stripped away but there is still enough meat for the audience to sink its teeth in.  The actors of this production had some pretty large shoes to fill considering some of the biggest names in Hollywood performed these characters on screen; the comparisons to the actors of the film are inevitable.  Led by Sebastian Arcelus, who plays Jake Brigance, each member of this cast turn in a fair performance.  Veterans Tom Skerritt and Fred Dalton Thompson offer great portrayals of Lucien Wilbanks and Judge Omar Noose.  Skerritt was as charming as ever as Lucien and Thompson’s feisty Judge Noose was a pleasure to watch, however it’s still the relationship between Jake Brigance and Carl Lee Hailey that drives this story.  Sebastian Arcelus and John Douglas Thompson showed promise as Jake and Carl Lee.

A Time to Kill received negative reviews when it played in D.C. in 2011, but the creative team appears to have worked out some of the kinks and the Broadway version is more solid.  Whether you have read the novel or saw the movie, this adaptation of A Time to Kill ultimately provides its audience with a thought-provoking experience and is a good addition to the legacy of one of John Grisham’s most recognized stories.

Holy revival Batman!  There is a nightly resurrection going on every night at The Lyceum Theatre.   In an era when rock titans such as Jimi Hendrix and Jim Morrison walked the earth and groups like The Who asked to die before they got old, a little lady from Texas with extraordinary chops offered up pieces of her heart and become just as legendary as the boys –her name was Janis Joplin.

Janis Joplin was born in Port Arthur, Texas in 1943.  She was raised in a cocoon of various musical influences courtesy of her mother and father.  When she finally did spread her wings, she flew to San Francisco in 1963.  She briefly returned to Texas only to go back to California in 1966 to join Big Brother and the Holding Company as their lead singer.  By the time of Joplin’s untimely death in October 1970, she had ensured her legacy as a rock goddess and with her unique interpretation of songs, one of the most recognizable voices ever.

I don’t think the world needed any reminders about the raw power and beauty of Janis Joplin’s voice, but in case it did A Night with Janis Joplin served a stunning aide-mémoire.  This production is a hot rocking time capsule.  Once it starts the audience is shuttled back to the Age of Aquarius with one of its most colorful figures as mistress of ceremonies.

I expected A Night with Janis Joplin to typical a jukebox musical chronicling the highs and lows of Joplin’s life with the musical numbers accentuating the book.  I was pleasantly surprised.  A Night with Janis Joplin is more like a concert and is all about the music, mainly the singers that influenced Joplin’s sound – singers like Nina Simone, Bessie Smith and Etta James.  Even the Queen of Soul was present to do a number with Janis that injected everyone in the audience with the spirit. Mary Bridget Davies is nothing short of phenomenal as Janis Joplin, it’s like she comes from another plane.  For an individual who didn’t get the opportunity to experience Janis Joplin when she was alive, Davies’ performance is awe inspiring. Taprena Michelle Augustine, De’Adre Aziza, Allison Blackwell and Nikki Kimbrough round out the cast of ladies on stage playing The Joplinaires as well as The Chantels, Bessie Smith, Nina Simone and Aretha Franklin –their voices soar to right out of the theater and up to heaven.

A Night with Janis Joplin is a loving tribute to music of the Pearl and the strong, mainly unsung women that inspired her.  There was never a point in the show where I wanted to be contained in my seat, my feet never stopped tapping.  I wanted to sway, shake and move in the aisle and enjoyed watching the audience becoming part of the show and singing along.  Hearing “Me and Bobby McGee”, “Ball and Chain” and “Stay with Me” performed live brought me to tears.   Mary Bridget Davies doesn’t just sing she performs a séance.  A Night with Janis Joplin is a prime example of how music can transport and uplift the soul.  It’s a must see. 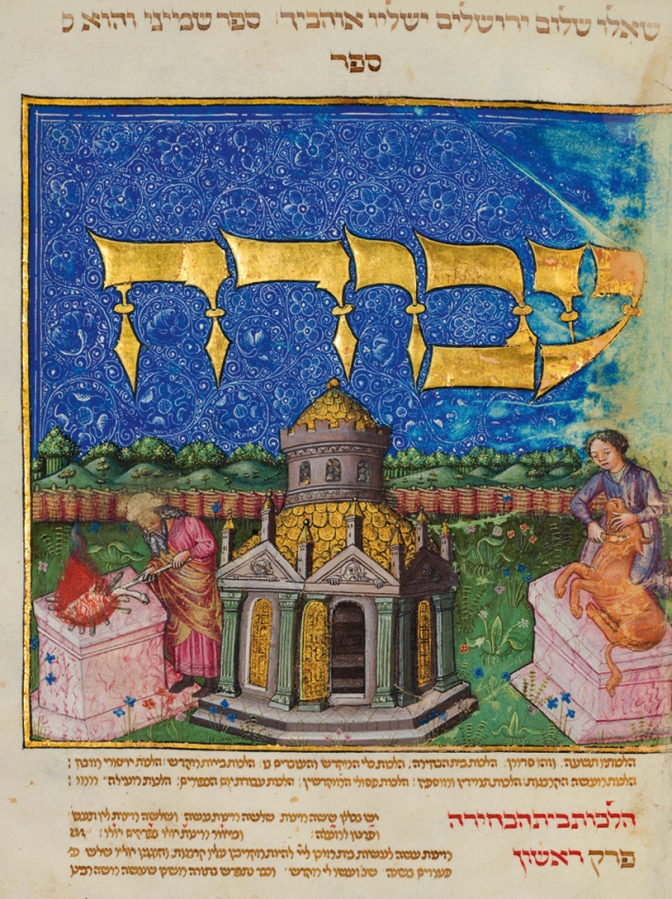 Beginning October 1, The Met debuts a rare 15-century handwritten copy of the Mishneh Torah by the renowned medieval scholar Moses Maimonides.  The work will be showcased in The Lawrence A. and Barbara Fleischman Gallery of Late Medieval Secular Art among other 15th-century works from Europe and will remain at The Met through January 5, 2014.

Created in Northern Italy around 1457 by Marco Barbo, Bishop of Treviso, the Hebrew text includes the eight final books of the Mishneh Torah, or “Repetition of the Law,” the first systematic collection of Jewish law. Amassed between 1170 and 1180 by rabbi, physician, and philosopher Moses Maimonides, the Mishneh Torah is organized by subject matter and contains six large painted panels decorated in exquisite pigments and gold leaf and 41 smaller illustrations with gold lettering decorating the opening words of each chapter.

The beautifully adorned text was acquired jointly by The Metropolitan Museum and The Israel Museum in Jerusalem in April. Prior to its presentation at the Metropolitan, the manuscript underwent restoration at the Israel Museum, where it has been on long-term loan since 2007 and on view to the public since 2010. The Mishneh Torah was purchased for The Israel Museum by René and Susanne Braginsky, Zurich; Renée and Lester Crown, Schusterman Foundation  and Judy and Michael Steinhardt. It was purchased for The Metropolitan Museum of Art with Director’s funds and Judy and Michael Steinhardt Gift.