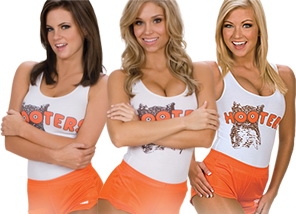 Since the apocalypse didn’t come, you might be looking for something to do on New Year’s Eve.  Thousands of people will be in Times Square, but that might be a little crowded.  Instead, how about saying hello to Baby New Year on W.56th with jugs of beer, hot wings and jugs?  Bid farewell to 2012 at Hooters on Broadway.  You might just start of your new year with a kiss from a Hooter’s girl.   If not, there are always the boneless wings.

The Rockefeller Christmas tree wasn’t the only thing attracting visitors this holiday season.  The opening night of Golden Boy brought out the stars.  Check out this video below to see all the interviews and festivities. 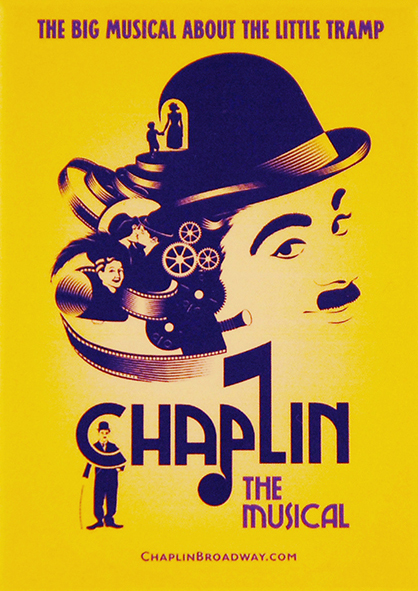 Charlie Chaplin was an icon and trailblazer, but with the exception of a few reels that pay homage to the golden age of Hollywood, The Little Tramp has pretty much become that short guy with the mustache, cane and funny shuffle.  This year the spirit, talent and story Charlie Chaplin was resurrected into the spotlight once more via Chaplin the Musical.

Chaplin the Musical depicts the life of Charlie Chaplin through song and dance and has given birth to a new Broadway star Rob McClure, who plays the lead character.  The production has provided theatre goers with a touch of nostalgia, but the black and white glory of old Hollywood and its greatest star will be fading soon.  Chaplin the Musical is in its final weeks at the Barrymore Theatre.  The final show is January 6.  There is still time to see the original Dictator before he shuffles back into the annals of time. 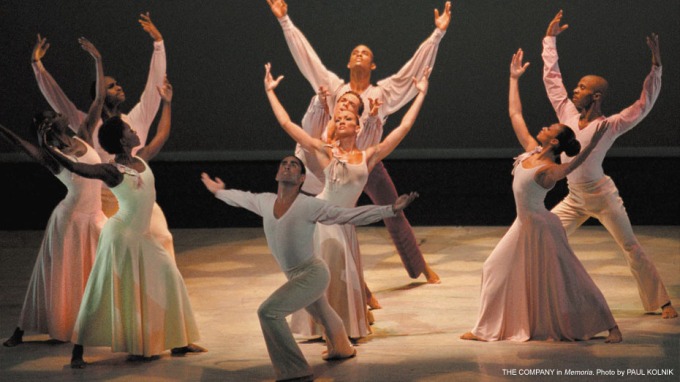 In Interview with a Vampire, the vampire Armand chooses a companion from the current century in order to transition into a new era thereby keeping himself relevant.   So if you are one of the most recognized dance companies and global ambassadors of the arts, how do you maintain your dominance?  You take a page out of Armand’s book.  Alvin Ailey American Dance Theater has cultivated a reputation for excellence in dance and this season AAADT continues to stand on top of the Pantheon of modern dance companies by showcasing the future while continuing to preserve the best Ailey.

This season Alvin Ailey American Dance Theater premiered six productions at the New York City Center, two of which were new, three were company premieres and one a world premiere.  Along with staples such as Revelations, Night Creature, Minus 16 and Urban Folk Dance, AAADT confidently prances into the 21st century with athletic grace. 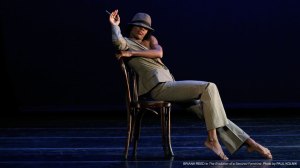 With the exception of the iconic Revelations, I was privy to view a night of firsts for the company.  On December 5, Alvin Ailey American Dance Theater performed Memoria and The Evolution of a Secured Feminine for the first time this season.  I also was fortunate enough to witness the world premiere performance of Another Night.

Memoria, choreographed by Alvin Ailey in 1979 and dedicated to the memory of his friend Joyce Trisler, is classic Ailey on display.  The work is celebratory and poignant, evoking spirits and emotion in each move.  To add a modern twist, members of The Ailey School, dressed in vibrant colors, joined the members of AAADT on stage bringing a zephyr of effervescence to an already powerful ballet. 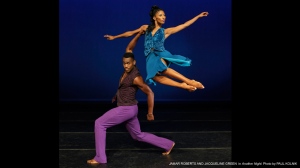 Another Night truly captured the essence of AAADT’s ability to fresh and contemporary.   Kyle Abraham is a rising star in the dance world, and after viewing this work I’m certain that he will take his place amongst dance royalty someday.  Set to Dizzy Gillespie’s “Night in Tunisia”, Abraham takes a timeless jazz tune and breathes new life into bebop with moves that remain true to Ailey’s Horton roots, but also carry the aesthetic and energy of New York’s underground dance scene.  Another Night reminded me of the countless nights I participated in circles, sprinkling baby powder on the floor.  When one of the dancers broke into a duck walk, I knew they were working for the children (of the night that is) and getting their life on that stage.  I wanted to get up and dance with them.  This season AAADT also bid farewell to Renee Robinson, her last performance with the company was December 9.   It was bittersweet to see her dance in Revelations one last time.

The role of an ambassador is to represent his/her country or sovereign.  With Robert Battle now adding new chapters to the legacy Alvin Ailey built over 50 years ago, no one can deny that AAADT has represented their medium of the arts with unparalleled passion and will continue to not only remain majestic, but ageless as well. 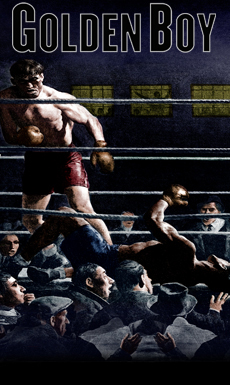 Move over De La Hoya, there is a new golden boy on the scene.  He is 75-years-old and has been here before.  The sweet science of boxing is on display in the revival of Golden Boy at the theater in which the play premiered 75 years ago.  Golden Boy opened November 4, 1937, ran for 250 performances and was playwright Clifford Odets biggest hit.  It seems that everything old is new again at the Belasco Theatre and all that glitters is still gold for Golden Boy. 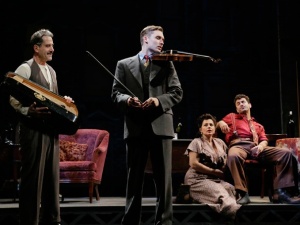 The play is set in 1930s Manhattan and focuses on Joe Bonaparte, a budding violinist that is torn between his passion for music and the irresistible attraction to fame and success that can be gained from the blood sport of boxing. Young Joe is exceptional at both, but he must choose one as the wear and tear of boxing will obliterate his ability to play music.  Against his father’s wishes, Joe chooses boxing and gets sucked into the undertow that can come with riding the wave of success, which ultimately leads to his demise. 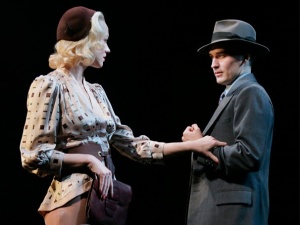 It is apparent why the allure of they play is still so appealing.  At the heart of Golden Boy lies the eternal challenge of balancing want and need.  The genesis of the play was born from Odets’ struggle to balance art and materialism, and every character in the play deals with it.  Joe wants to be a great musician, but his need for fortune overpowers him.  Joe’s father wants his son to choose music, but the need for a parent to allow a child to find their own path makes Mr. Bonaparte loosen his grip on Joe.  Lorna Moon, the dame from Newark, wants to be with Joe, but the need to be taken care of and remain loyal to her boss, who also happens to be Joe’s manager, forces her to stay with Tom Moody.  Tom wants to get rid of Joe, but the need to finally be successful clouds his judgment.  No character in the play finds the balance they desperately seek, displaying how difficult it is to achieve it.  The question of balancing want and need was just as imminent in 1937 as it is in 2012 and like the best art; Golden Boy leaves us to brood about the questions that are at the core of life. 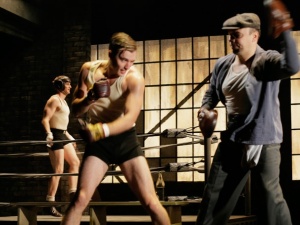 The cast of this revival shine with the shimmer of an unearthed nugget.  Seth Numrich excels as the tragic Joe Bonaparte.  Watching his emotions teeter back and forth as he spirals into the abyss of meaningless fame is like taking a ride on the Cyclone – in one word he is thrilling. Tony Shalhoub is magnificent as Joe’s immigrant father.  His performance is beautifully heartbreaking.  Danny Mastrogiorgio and Yvonne Strahovski are memorable as Lorna Moon and Tom Moody.  Along with the sets of Michael Yeargan and the costumes of Catherine Zuber, the cast splendidly resurrects the time period and material Odets wrote decades ago.

The famed Hailey’s Comet blazes across our atmosphere every 75 years, it appears this play may also share the same time schedule as the legendary solar system body.  Golden Boy will be playing a limited 10-week engagement at the Belasco Theatre.  It is a play that is definitely worth its weight and should not be missed. 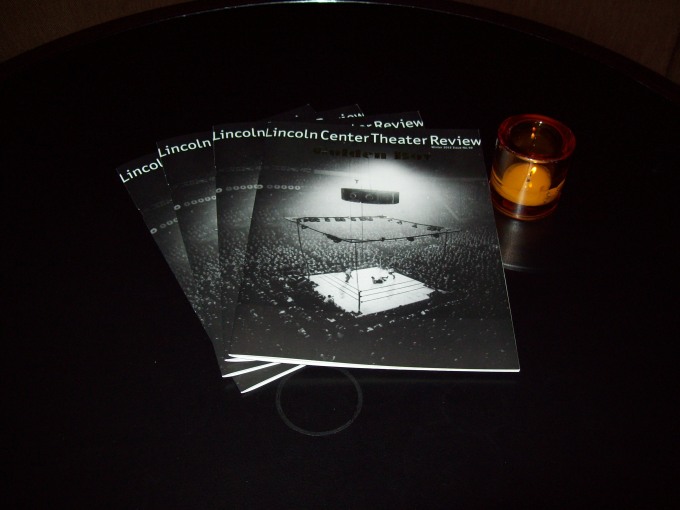 In boxing, having a big power punch is always a good tool to have in one’s arsenal when looking to land a knockout, but generally it is a consistent set of combination shots that wears an opponent down and ultimately wins the fight.  Last Tuesday, The Lamb’s Club, Serino Coyne, Lincoln Center Theater and the cast of the revival of Golden Boy delivered a 24 karat TKO during their buzzmaker event.

Members of the press were invited to visit one of Times Square most elegant eateries and learn more about Golden Boy, now in previews at the Belasco Theatre.  While munching on succulent appetizers from The Lamb’s Club dinner menu such as, Yellowfin Tuna Tartare, Spicy Veal Meatballs and Pork Belly with Puff Rice, bloggers, journalists and photographers were introduced to cast members Danny Mastrogiorgio, Danny Burtstein, Brad Fleischer, Karl Glusman and Seth Numrich (who plays Joe Bonaparte).  Also on hand, were sketches of the costumes designed by Catherine Zuber, which included a blue dress that pays homage to the actress haunting the Belasco Theatre.

The pre-performance event possessed a buoyant atmosphere as cast members answered questions, shared their training routine as well as engaging anecdotes about how they became a part of the 75-year-old revival.  Golden Boy features a glimpse of New York City in the 1930s and the sophisticated, metropolitan ambiance of The Lamb’s Club bar made the perfect compliment to an already blithe and dashing affair.  Outside of meeting the cast, the highlight of my evening was the discovery of my new favorite cocktail – The Gold Rush.

Chef Geoffrey Zakarian and partners have created quite a dining gem in the heart of the theater district.  Along with its swanky décor and exceptional cuisine, The Lamb’s Club possesses an affinity for the arts. The restaurant hosted an event for the cast of Chaplin the Musical in August and features live jazz at the bar on Wednesdays.  And for hungry audience members looking to get a bite to eat before or after attending Golden Boy, The Lamb’s Club is across the street from the Belasco Theatre and offers pre and post theater dinner options. 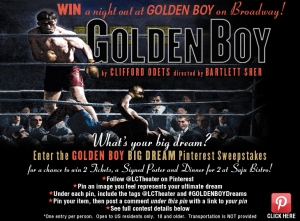 All and all this buzzmaker event was a sparkling start to an evening that also included a great night of theater.  Golden Boy premiers December 6 for a 10-week run at the Belasco Theatre, I suggest taking a note from the past this holiday season by getting dressed to the nines, having dinner at The Lamb’s Club at six, catching a performance of Golden Boy at eight and treating yourself to a good old-fashioned night of dinner and a show in the city.  If you are feeling particularly lucky, you may want to enter Golden Boy’s Pinterest contest, http://pinterest.com/lctheater/golden-boy-contest/.

To learn more about Golden Boy or The Lamb’s Club, click www.lct.org or www.thelambsclub.com/.