This year Sejong Soloists had two very important milestones to celebrate, 2014 marked their 20th anniversary and the 70th birthday for artistic director Hyo Kang.  On October 28, Sejong Soloists took the stage of Alice Tully Hall at Lincoln Center for their annual benefit concert. Emmy award-winning journalist Paula Zahn returned for her 12th season as host for the event and joined the string orchestra on stage playing cello as they performed, “Serenade Humoristique a l’ espangnole.”

The Sejong Soloists is the brainchild of Kang conceiving the idea of a conductor-less string orchestra.  In 1994, Kang invited 11 young, gifted musicians from across the globe, all of whom were attending Julliard School, in order to develop and mentor the newly formed ensemble.  Kang himself was a violin faculty member at Julliard at the time and through his mentorship, the young string players and many others, who have taken part in the ensemble during the past two decades, have been able to forge relationships with composers, become rising stars themselves and have entertained hundreds with their sublime musicality and bowing showmanship.

During the gala concert Sejong Soloists performed works from Bach, Vivaldi, Tchaikovsky, as well as J. Hyun, Carlos Franzetti, Hal Leonard and Pablo de Sarasate. On stage Sejong Soloists were joined by violin virtuosos Gil Shaham, Adele Anthony, Yura Lee, David Chan, Catherine Cho and Chee-Yun to perform various solos throughout the concert, each adding another wonderful layer of depth and fullness to the overall performance.   Those who were in attendance witnessed a spectacular that was as stunning to the eyes as it was to the ears.  The physicality of the performers truly demonstrated the passion that was coming through their instruments.  If this was an Olympic competition, Sejong Soloists would receive nothing but 10s across the board.  Technically they exhibited a tonality that was rich with various levels of sound.  It was amazing to hear how the sound completely filled the stage and the hall itself.  At no point did the music seem sparse; it flowed from the stage in waves and felt larger than the ensemble that had gathered on stage.  The achievement of Sejong Soloists’ big sound can only be attributed to the guidance of Hang as well as their enormous talent.  This string orchestra is certainly one of the most enjoyable musical experiences I’ve had in a while.

Sejong Soloists is a 501(c) (3) tax-exempt organization.  The annual gala concert provides an opportunity for lovers and neophytes of classical music to experience the next luminaries of this genre as well as to honor the tireless effort of those who assist in growing this exceptional artistic organization.   To learn more about Sejong Soloists or to make a donation, please visit, http://www.sejongsoloists.org/. 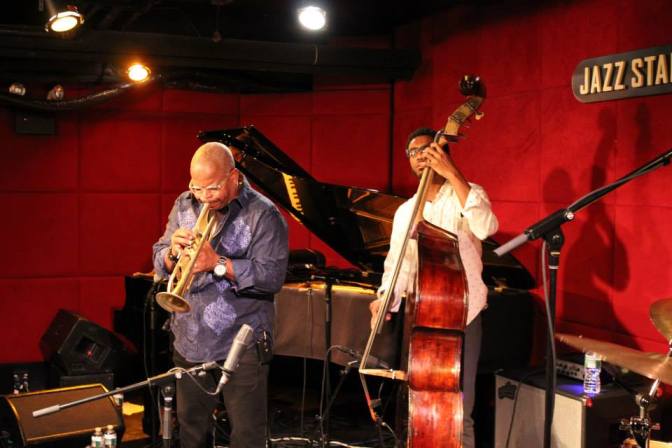 Nothing can warm up a cool autumn night in NYC like a plate of barbeque, a glass of wine and the sound of live jazz.  With Jazz Standard, you’re guaranteed a night of good food and good music.  Located at 116 East 27th Street, Jazz Standard is one the nation’s premier jazz clubs.  Each month they offer an array of legendary and new talent in an intimate candlelit setting.   This month they started off with the Terence Blanchard Quintet.  In my book Blanchard’s music is the secret ingredient that takes Spike Lee’s films to another level.  Blanchard’s horn can also be heard in the 2001 movie Original Sin.

From October 1-5 the Terence Blanchard Quintet enraptured patrons of Jazz Standard with selections off his latest album Magnetic  as well as other selections composed by members of the quintet and other pieces from past albums.  The quintet is comprised of virtuoso Blanchard on the trumpet, veteran Brice Winston on saxophone and upcoming stars Joshua Crumbly on bass, Fabian Almazan on piano and Justin Brown on drums. I was privileged to be in the audience for Blanchard’s last two sets on Sunday.  Both sets were as electrifying as the name of Blanchard’s latest album starting off with an energetic, toe tapping piece, then following up with a more down tempo, melodic number and ending the set on a beautiful, robust note (pun intended).

Along with the Terence Blanchard Quintet, Jazz Standard’s features for October include Steve Wilson Quintet, James Carter’s “Django Unchained,” and Edmar Castaneda World Ensemble.  Every Monday belongs to the music of Charles Mingus.  Billed “Mingus Monday,” the regular series presents the genius innovations that made Charles Mingus one of jazz most prolific bassists and composers.  It doesn’t matter whether your jazz exposure has been Kenny G or if you’re lifetime member to WBGO, you’ll be thoroughly entertained at Jazz Standard.  The mix of artists proves why jazz is one of the last true art forms to come out of America and why this music must be preserved and continued for future generations.