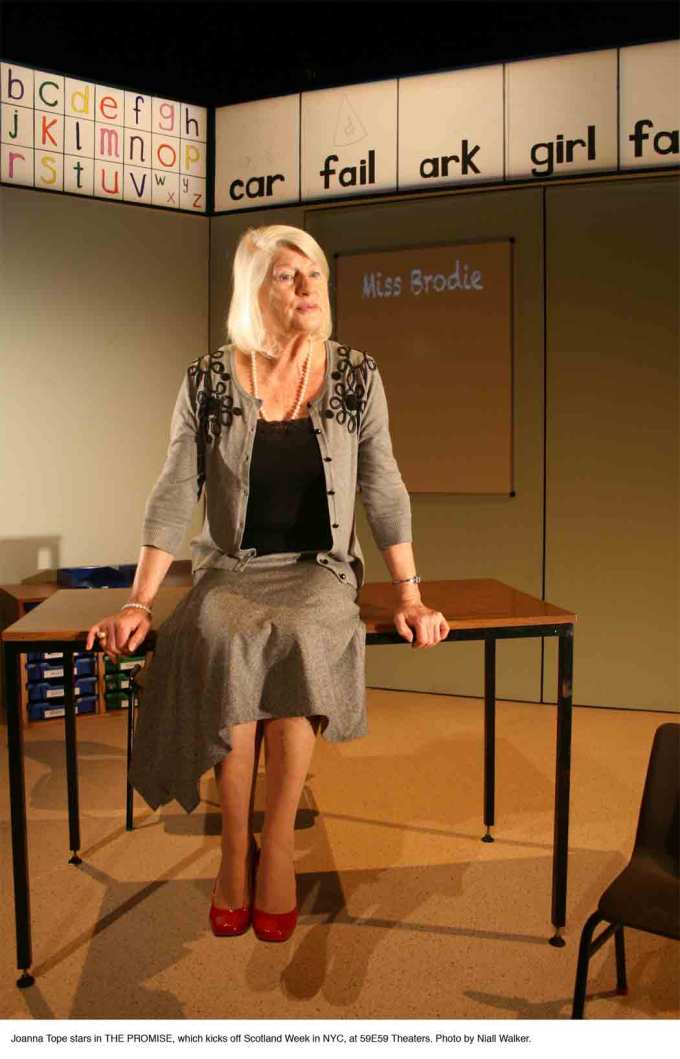 To walk a mile in someone else’s shoes is a task most people can conceive, but rarely can be executed.  Why, because it is more difficult to actually live another person’s experiences than one might believe.  This is why empathy is such a virtuous emotion.  Thanks to the exquisite delivery of Scottish actress Joanna Tope, the audiences watching The Promise embark on a 90-minute trek following in the footsteps of Maggie Brodie in an alluring monologue that holds the viewers captive from the first sentence.

The Promise, a drama inspired by true events, centers around one climatic day in the life of twice retired school teacher Maggie Brodie.  She is an alcoholic struggling with the ghosts of her past – her father’s pride and demeanor (which she inadvertently inherited), her disdain for religion, the broken relationship with her little sister and vampish ways with men.  But Ms. Brodie has one thing on her side, she has always been able to keep a promise.  On this day she is called back to do a substitute teaching gig, her ability to keep a promise will be tested as a new student matriculates into the classroom – a young Somali girl named Rosie who refuses to speak.  Maggie sees little Rosie as a mirror and instantly connects with her.  When community leaders, who have arranged a deal with the school to have a ritual performed in class, attempt to free Rosie of her evil spirits, Maggie’s demons come full circle as she zealously defends Rosie and the promise she made to keep her safe and not disclose her secret.

Playwright Douglas Maxwell has written a gripping story that reminds me of Ravel’s Bolero.  Just like the classic composer, he excels in bringing drama to a frenzied crescendo.   Both he and Joana Trope are Scottish imports that I would not mind having around for a while.  Too bad countries cannot trade actors and playwrights they way the NBA trade players.  Watching Joanna Tope sashay across the stage in fire engine red patent leather pumps like a weathered gunslinger aching for the opportunity to get her gun off is a rare treat – her commanding presence is sexy and spellbinding. She is a definitely a force to be reckoned with.  The only problem I had with The Promise is its limited run at 59E59 Theaters.  The final performance is April 17; FAMERS, make a promise to yourself and go see The Promise before it ends.  It is a covenant of terrific theatre with a twist you will never forget.

One thought on “The Promise Delivers”