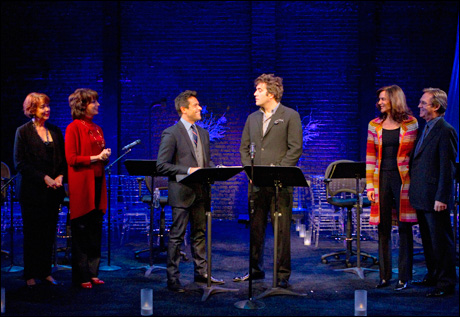 Marriage is an institution that heterosexuals constantly question – Is it antiquated?  Why did I get married?  Is there truly a happily ever after?  When it comes to homosexuals, I believe only one question comes to mind when the subject of marriage is brought up – Why can I only marry in six states?  Besides Washington D.C., Oregon’s Coquille and Washington State’s Suquamish Indian tribes, New York, Connecticut, Iowa, Massachusetts, New Hampshire, Vermont and Iowa are the only states in which same-sex marriage is legal.  The movement to achieve marriage rights and benefits for homosexual couples in the US began in the early 70s and is still a hotbed political issue.   Very often art uses real life situations as a muse to create a powerful piece of work that will provoke people to become inspired, think and be motivated enough to act.  Such is the case with Standing on Ceremony the Gay Marriage Plays. 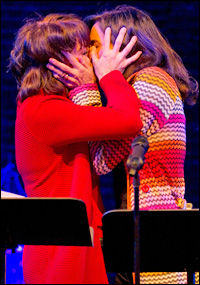 Standing on Ceremony is a compilation of nine plays that courageously, poignantly and hilariously attack the issue of gay marriage in America.  The plays are written by Wendy MacLeod, Paul Rudnick, Jordan Harrison, Neil LaBute, Jose Rivera, Mo Gaffney and Doug Wright and are as unique as they are brilliant.  Stage and screen veterans Beth Leavel, Richard Thomas, Mark Consuelos, Polly Draper, Craig Bierko and Harriet Harris passionately and exquisitely perform the material, taking the audience on a journey that spans the range of human emotion.

For me, what resonated more than the universal theme throughout the plays was the universal experiences that are the same for everyone whether heterosexual or homosexual.  We all experience death, fear, head over heels affection, preconceived beliefs, bliss and outrage.  Standing on Ceremony is by far one of the most relevant productions to hit the stage this millennium.  It is The Normal Heart for this century.  No one can view this production and not be moved.

A portion of ticket sales from each performance will go to Freedom to Marry and other organizations promoting marriage equality. Standing on Ceremony is playing at the Minetta Lane Theatre, located at 18 Minetta Lane east of 6th Avenue between 3rd Street and Bleecker.  Buy a ticket and say, “You do too.”

Join Standing on Ceremony on Facebook and find out how to win a party for your party of 20, http://www.facebook.com/standingonceremony?sk=app_112053162216760.

One thought on “Love, Loss and Gay Marriage”