“Let’s make it rain” – the catchphrase for Jonas Nightingale and his sister Sam.  But when they say it, they don’t mean prayers for the drought in the Kansas town their Mercedes bus broke down in; they mean it in a pouring of dollars at a strip club sort of way.  That’s right Broadway; you got a con man in your midst.   And he is the son of a preacher man.  Let’s face it, the traveling confidence man promising rain is no stranger to Broadway or Hollywood.  In 1954, N. Richard Nash’s The Rainmaker debuted at the Cort Theatre.  In 1956, Burt Lancaster and Katherine Hepburn starred in the movie.  In 1963, a musical based on The Rainmaker titled 110 in the Shade premiered at the Broadhurst Theatre.  In 1999, the play was revived on Broadway.   However, this new musical is based on the 1992 dramedy that starred Steve Martin and Debra Winger.

Similar to the film, the musical centers on Jonas Nightingale is a traveling, “let the power of God work through my hands” faith healer bouncing from town to town, holding nightly revivals and playing on the hopes and fears of the local yokels.  After the third night (and a possible tryst or two) he blows town after bilking the townsfolk out of all of their money.   Although the concept of the musical is based on the film, it appears that musical doesn’t go by the book (no pun intended).  Besides Jonas and a local paralyzed boy who believes Jonas could make him walk again, the book of this production transforms the sheriff into a female love interest and adds a new cast to assist in raising the roof off of the St. James Theatre.

The musical begins before the curtain rises.  As the audience takes their seat, they are greeted with the sounds of gospel music, while a cameraman fine tunes his camera on stage.    Suddenly the audience realizes they are a part of show as their faces appear on the screens, located on opposite ends of the stage, and cast members hand out fake money to people seated the first few rows.  The show opens with an electrifying performance by the Angels of Mercy (Jonas’ choir) and Jonas beginning the last night his New York City revival by telling the audience about his road to redemption.  The audience then travels back a year as Jonas, his sister Sam and the Angels of Mercy decide what to do after their bus breaks down.  After realizing that Jonas is wanted in multiple states and the repairs on the bus will take a few days to fix, Jonas and his team choose to pitch their tent in the sleepy, drought stricken town and take them for what little they have. 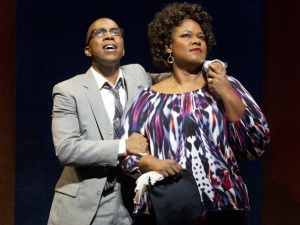 The scam is on but not before Sheriff Marla McGowan can give Jonas a stern warning, which does little to stop them.  As night one of the revival begins, Jonas’ has enough info on the town to make them believe has descended from heaven –mirrored jacket and all – to deliver rain.  His staunchest supporter is Jake McGowan, a disabled boy who happens to be the son of the sheriff.  He believes wholeheartedly that Jonas will make him rise up from his wheelchair and walk.   Jonas and his troupe aren’t the only newcomers to the town.  Isaiah Sturdevant, son of choir director Ida Mae Sturdevant and brother of Angels of Mercy ingénue Ornella Sturdevant, is hell-bent on saving his mother and sister from Jonas’ clutches and uncovering him for the charlatan that he is.

Although the sheriff wants Jonas gone, the two enter into an uneasy agreement with benefits and Jonas gets to finish his revival as long as he doesn’t aim any of his empty promises at her son.  Over the next two days, Jonas is exposed, falls in love, watches Jake’s faith give him the ability to walk again, questions his faith and decides to give his traveling church to Isaiah, a true believer.  Inspiring ending, right?  But I know what you FAMERS really want to know is, did Jonas make it rain?  Make it rain he did, literally and figuratively.  Leap of Faith soaks its audience with good vibes, wonderful voices and a new spin on an old tale.

One issue I feel that a movie turned musical has to overcome is any lingering feelings that an audience may carry with them into the theatre about the previous work.  People attach emotion to works of art that have moved them – no matter the genre as well as to the actors that bring a characters alive.  So the question becomes, is this going to be a remastering of an already established work, or will be sad reincarnation of a script with music and dancing crammed in where it could fit in?  Luckily I had never seen the Steve Martin film, so I had the privilege of viewing this work with a fresh pair of eyes.  And to answer my own question, I never felt that this incarnation of Leap of Faith was a comedy with music and choreography shoved in willy-nilly.

Leap of Faith carries enough of the “Broadway Formula” that it will be appealing to Broadway diehards and fresh enough to bring newbies out and into the seats.  Janus Cercone and Warren Leight wrote a book that parallels the movie, but still is its own entity.   Alan Menken’s music and Glenn Slater’s lyrics are crafted well enough to have the audience toe-tapping in their seats.  The choreography of Sergio Trujillo had a Horton- esque quality to it with the movements tailored to every member of the cast.  The cast makes good on the material – Raul Esparza shines brighter than those glittery suit jackets he wears as Jonas Nightingale, Jessica Phillips is convincing as the sadder but wiser sheriff scared to trust and Talon Ackerman’s earnest performance of Jake could melt anyone’s skeptical heart.  But what really makes Leap of Faith rise through to the stratosphere are the voices of Kecia Lewis-Evans, Leslie Odom Jr., Krystal Joy Brown and The Angels of Mercy choir.  They could give the New Jersey Mass choir a run for its money.  Esparza breaks the fourth wall periodically throughout the show, which I enjoy and with the audience being a part of the musical, the production provides an interactive experience.   The casts projects a universal feel not seen in a lot of musicals and I found the sight of all different body types dancing on the stage to be wonderfully refreshing.  They are not just toned dancers; instead they do feel like individuals you would meet at your local parish.  I don’t know when you visited church last, but the St. James Theatre is holding church every evening and twice on Saturday and Wednesday.  I suggest you hightail it down there and get your dose of hosanna with Leap of Faith.  It is a jump worth taking.