It’s official kids… the force of nature that is hip hop has crashed down on the Great White Way.  The music and culture that was created in the Bronx has changed the course of music and pop culture and influenced the world.  Hip hop and I grew up together.  When it was still a burgeoning form of music, hip hop served as a medium to convey the joys and sorrows of one’s neighborhood.  It was through hip hop that I learned how folks got down in Cali, of Bloods and Crips and low riders.  I learned what it meant to be chopped and screwed.  Through the vivid stories of MCs nationwide, I got to see what made all impoverished areas different and the same.   No MC reported the tales of the streets and the ills of society more poetically than Tupac Shakur.  When Tupac passed away on September 13, 1996 of respiratory failure and cardiopulmonary arrest in connection with multiple gunshot wounds, a part of my heart and youth died.  Since his untimely death at the age of 25, Tupac rose to the heights of icon status.  His lyrics and life inspired college courses and he is considered one of the greatest artists and MCs of all time.  Now the music of Tupac Shakur is the driving force of a new musical, Holler If Ya Hear Me, playing at the Palace Theatre. 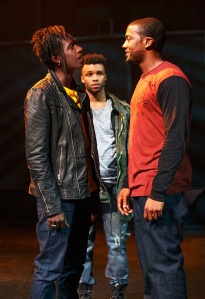 Holler If Ya Hear Me uses Pac’s music to tell the story of urban plight, love and change.  John, played by the Saul Williams, has just returned to the neighborhood after serving a stint in prison.  With his hustling days behind him, he is hell-bent on changing his life for the better, but it’s hard to find change when the cycle of poverty keeps circling.  John’s friend Benny is murdered by a rival gang and the neighborhood is reeling.  Revenge weighs heavy on the heart of his brother Vertus and the homies that are left behind.  Violence seems imminent.  Even John has appeared to have discarded his plan of peace, until he is reminded there is a better way.  As John and Vertus decide to abandon any notions of retaliation, the neighborhood is rocked by another senseless death, which proves how the cycle of violence will only continue if strides aren’t made to break it.

The jukebox musical is a sure fire way of guaranteeing a successful theatre production.  The music and lyrics already have a legion of dedicated listeners, which promises at the very least the ability to recoup the monies invested in bringing a production to a Broadway stage.  One can almost argue that a jukebox musical is cheating because half the work has already been done.  The struggles of inner-city life and the desire to break away from its hopelessness isn’t a new theme.  In fact, one the most brilliant productions to ever explore this topic, A Raisin in the Sun, is currently enjoying another revival on Broadway.  Even the idea of hip hop isn’t entirely new.  Lin-Manuel Miranda introduced elements of the musical genre to the stage in In the Heights. But what is new is a jukebox musical based off of hip hop, and now rap has one with Holler If Ya Hear Me. 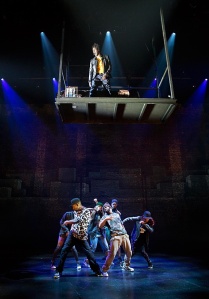 With the music of Tupac Shakur fueling this production, Holler If Ya Hear Me was poised to blow the roof off of the Palace Theatre.  However, there was one thing that stopped this production from rocketing off into the stratosphere, the book.   The neighborhood, which is set in the present day, could be any ghetto USA.  I’m in total agreement that Tupac’s lyrics are timeless, but the story could’ve benefitted by setting it in a specific city or region of the country.   One can argue that the story is clichéd taking cues from Menace to Society and Boyz in the Hood as well as West Side Story.  Maybe it’s my age or maybe it’s just challenging to create an original story in this century, but the book didn’t deliver on the dynamism reflected in Pac’s music making the production unbalanced.    The choreography wasn’t as explosive as I had hoped and the lack of a set left the actors drowning in on a half empty stage.  But even with these flaws, Holler If Ya Hear Me still shines because of Tupac’s music and the ability of Saul Williams to transcend past an overdone story to deliver a powerful performance.  Williams is no stranger to exuding passion on stage, after all he is one of the world’s most well-known slam poets.  Williams rage, sensitivity, charisma and presence were felt in every corner of the audience. 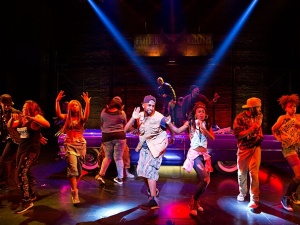 When it is all said and done, Holler If Ya Hear Me will join the long list of musical productions made during this millennium that teeters somewhere in the middle, not disastrous but not reaching the glorious spectacle of what musical theater used to be.  But I know very well that the people won’t come to this musical because they love musicals or Broadway.  They will come to pay homage to Tupac Shakur – a man who indeed was like a spark and through his ignition he succeeded in changing the face of hip hop and the world.  If nothing else this production shows how relevant Tupac still is. Holler If Ya Hear Me roars and I holler back, “Viva Tupac Amaru Shakur!”