Once upon a time in there was an island, surrounded by the Hudson and Harlem Rivers.  It was a place where the underworld, “Regular Joes” and elite flowed past each other creating a unique aura that produced the energy for a city that never slept.  Those seeking fame and fortune came to the island to stake their claim and be seen.  Manhattan was a melting pot brimming to the top with a million and one stories that now haunt the streets like ghosts over resurrected apartment complexes and 21st-century skyscrapers.

One such story about that emerged out of this glorious period was the story of David Hampton.  A handsome grifter from Buffalo N.Y., Hampton used his good looks, manners and ability to manipulate others to intersect with the upper-crust of New York City society and glitterati.  By pretending to be the son of Sidney Poitier, Hampton dined for free at the best restaurants, received A-list treatment at New York City hot spots and flimflammed his way into the homes of the Upper East Side.

Playwright John Guare became aware of Hampton’s infamous con when married friends of his became one of Hampton’s many marks.  Their intersection became the foundation for his play Six Degrees of Separation.    Six Degrees of Separation made its Broadway debut in 1990 at the Vivian Beaumont Theater and was nominated for the Pulitzer Prize and a Tony.   It was adapted into a movie in a film in 1993.  Now it’s back on Broadway for a limited 15-week engagement. 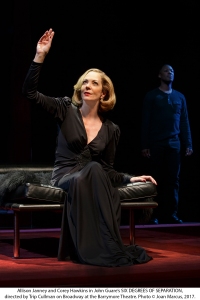 On the surface, Six Degrees of Separation explores the theory that everyone is connected by six other people.   The play primarily takes place at the apartment of Flan and Louisa “Ouisa” Kittredge, which overlooks Central Park.    Flan is an art dealer and one evening when he and his wife are entertaining (and ass-kissing) a super-rich friend, Paul, a young, charming black man, appears on their doorstep wounded and bleeding.  He claims he had been robbed and stabbed.  He claims he knew their children.  He says he is the son of Sidney Poitier.

Paul cooks them dinner and beguiles them, especially Ouisa who had been seeking a deeper connection with her own children.   Paul tells the Kittredge’s that he is expected to check into a hotel with his famous father in the morning.  Flan and Ouisa insist that Paul spends the night with them.  In the morning, Ouisa goes to wake Paul and finds him mid-coitus with a hustler he picked up after they had gone to bed.  After that encounter, Ouisa and Flan’s lives continue to intersect with Paul.  Finally, after one scam too many, the police get involved.  Sensing the police are closing in, Paul makes a final, desperate call to Ouisa to beg her to accompany him when he turns himself in.  She agrees to take him, but the police pounce before she can get there. Ouisa is left to ponder the future of Paul, the experience as a whole and her future after this experience. 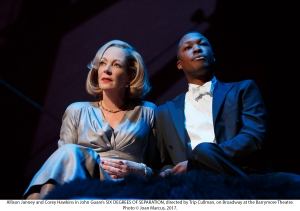 If one is only looking at the surface, it would appear that Six Degrees of Separation looks at how lives collide into each other and impact those collisions make, but the play takes us deep into the rabbit hole providing critiques on myriad topics.  Six Degrees of Separation tackles issues of race, class and homosexuality.  The beauty of Guare’s storytelling is the method in which these topics are brought to the forefront.  The dialogue is luscious, full of wry wit and flows with a hustle and bustle of New Yorkers beating their feet to the pavement during rush hour.  Guare doesn’t bop you over the head or smack you in the face with social commentary, instead, he guides you to a mirror, and when you are laughing at some snarky line, you suddenly realized you are looking at yourself and how you have perceived others.  New Yorkers are so quick to believe the hype of the liberalism simply because there are no monuments erected to Confederate generals in the middle of Times Square; however, when faced with our own Guess Who’s Coming to Dinner scenario, we suddenly realize we aren’t as free-thinking as we thought we were.  Through Flan, Ouisa and Paul, the audience is able to confront their own prejudices, fears and desires to belong.

The selection of the cast is a stroke of genius.  Allison Janney is hysterical as Ouisa; her comedic timing is impeccable.  When Ouisa is most introspective, Janney breathes tenderness into these moments.  Her performance reveals just how much Paul has changed the trajectory of Ouisa’s life.  John Benjamin Hickey provides a multi-faceted performance of Flan.  He is pretentious, yet sensitive.  He has the soul of a tortured artist, but reeks of capitalist greed.  He is a hypocrite, yet still totally likable.  The crown jewel in this cast is Corey Hawkins, who plays Paul.  From the moment he rushes onto the stage in a state of panic, he captivates the audience.  Without knowing, Hawkins wraps you around his finger and compels you to believe even the most fantastic lie. Every face Hawkins presents as Paul is equally as believable as the next.  When he says to Ouisa,” I like being looked at,” I thought to myself who would want to look away?  Hawkins goes deeper than just bringing the character of Paul to life for a new generation of theatergoers.   He honors the soul of the man whose infamous life was the catalyst for this splendid play.  He is a writer’s dream, a master actor in the making.

Six Degrees of Separation is a masterpiece.  The only problem with this production is the fact that it’ll only be at the Ethel Barrymore Theatre until July 16.  This play is too brilliant to run the risk of not being seen by every New Yorker and those who come to visit this metropolis.  The themes of this play are as relevant now as they were in 1990 because they are intrinsic components in the state of the human condition.  More importantly, this play is a time capsule of an era in New York City that will never come around again.  Only in Manhattan could a con artist pretend to be the child of an icon and hobnob with the crème de la crème of New York society.  Six Degrees of Separation is vivid, sexy and seedy; just like Paul.   It’s one Broadway experience that shouldn’t be missed.