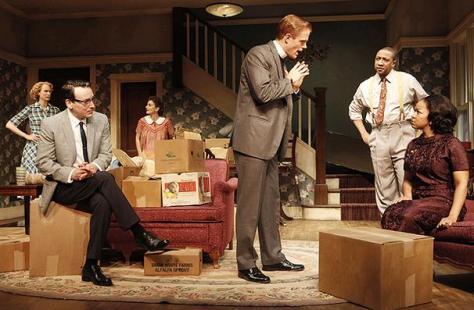 When Jefferson combined sentences from Richard Cumberland and John Locke to create the phrase “Life, Liberty and the pursuit of Happiness”, it might’ve not been evident to the Second Continental Congress that the pursuit of happiness actually meant property.  But as the original 13 colonies expanded, territories were drawn and invisible lines were created that dictated to citizens and noncitizens where they can cross and live, Jefferson’s underlying intention couldn’t be clearer.   The pursuit of property has always been at the heart of the American dream and is more patriotic than baseball or apple pie.  It can also be said that the pursuit of finding truth in art has been the desideratum of artisans ever since cavemen scribbled on ancient walls.

Often times, real life experiences inspire art; playwright and author Lorraine Hansberry used her own family experiences to create the masterpiece, A Raisin in the Sun.    Other times, art serves as the genesis to create new art; actor and playwright Bruce Norris picked up where Hansberry left off when he created Clybourne Park, awarded the 2011 Pulitzer Prize  for Drama as well as Britain’s Olivier Award for Best New Play.    The plot for A Raisin in the Sun deals with the Youngers, a black family in 1950s Chicago that wishes to realize a dream and improve their circumstances by purchasing a home in the all-white neighborhood of Clybourne Park.  Despite turmoil within the family as well as threats and a bribe from a representative of Clybourne Park’s Improvement Association, the Youngers decide to move into the home thus attaining their dream. 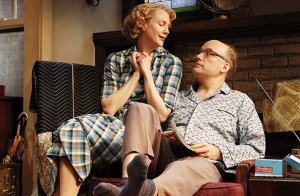 Clybourne Park consists of two acts; Act I centers on Bev and Russ, the couple selling the home the Youngers are buying.  They have become disillusioned with the neighborhood after being ostracized by their neighbors in the wake of their son’s, a Korean War vet, sudden death.  While preparing for the move, they are visited by the local chaplain, neighbor Karl Lindner and Linder’s deaf, pregnant wife.  Linder has just returned from his failed attempt to coerce the Youngers not to move into the neighborhood.  Trying to use his persuasive tactics on Bev and Russ, he implores them not to go through with the sale, fearing that the Youngers will be the first in an influx of black families, the neighborhood would be adversely affected and property values will plummet. To prove that black and white neighborhoods should be segregated he feebly tries to enlist the help of Bev and Russ’ black maid and her husband, who recently arrived to pick her up.  As the conversation continues, tensions and words boil as animosities surface and spill over.

Act II takes place in 2009 in the same house.  The neighborhood of Clybourne Park is now predominately black.  The house, once the center of controversy, is now the victim of serious neglect.  The encroaching reality of gentrification is looming as a white couple with child wants to buy the house and renovate it and any signs of its past.  They meet with the their lawyer and a black couple representing a neighborhood association and their lawyer to discuss their planned alterations for the house, which are in dispute by the neighborhood committee due to the area’s  historical significance.   As they discuss the fate of the house, it’s revealed that Kathy, the lawyer of the white couple, is the daughter of the Linder’s,  who moved from the neighborhood right after she was born, and Lena is related to the Youngers.  Just as in the first act, the discussion of the house’s destiny slides into an exchange about race that exposes just how far we have really come in America when it comes to this often taboo topic.

Slick…piercing…irreverently pleasing, Norris digs deep into America’s well of issues that skim underneath the quest to achieve Jefferson’s declaration and strikes black and white gold.  He also creates a splendid new chapter to Lorraine Hansberry’s seminal work.  Clybourne Park is a flawless and timeless production worthy of the Pulitzer Prize.  One could bury this play in a time capsule and after the apocalypse dig it up and it will not only show what human nature was like in the 20th and 21st centuries, it’ll more than likely indicate what human nature is like in the future since human behavior doesn’t change.  Norris interweaves race, loss, fear, ignorance, good intentions, gentrification and real estate with a humorous thread that creates a banner for all to see and discuss.  As A Raisin in the Sun was and is a piece that is a must see, so is Clybourne Park.

Just as Norris weaves themes, the cast weaves characters, each of them playing a dual or multiple roles.  Annie Parisse plays Betsy and Lindsey, Frank Wood portrays Russ and Dan, Crystal A. Dickinson plays the role of Francine and Lena, Brendan Griffin depicts the roles of Jim, Tom and Kenneth, Damon Gupton portrays Albert and Kevin, Christina Kirk plays Bev and Kathy and Jeremy Shamos completes the cast depicting Karl and Steve.  In each act the cast is sharp and lusciously engaging.    They effortlessly push the themes and dialogue, making lasting impressions with each character they play and deserve every ovation they receive.  The only problem I find with Clybourne Park is that it playing a limited engagement at the Walter Kerr Theatre, located at 219 West 48th Street.  This old house only stands for 16 weeks; I suggest making your way to the Theater District to see what is surely going to be the Tony Award winner for Best Play.