Or at least that was the title I envisioned in my head as I strolled in the misty rain to catch the Sunday matinee at the Richard Rodgers Theatre.  So imagine my surprise when I was told Ms. Sparks would not be playing the role of Nina as I had greatly anticipated.  Disappointed, I pouted to my seat, sat down and waited for the curtain to rise.

In the Heights blew onto Broadway in 2008 like a breath of fresh air tempered with a hint of Sazón.  Lin-Manuel Miranda, the show’s creator and the first incarnation of Usnavi, shined a spotlight on the Manhattan neighborhood of Washington Heights and struck gold.  The mix of salsa and hip-hop set to an orchestra was a concoction critics ingested well.  The show won four Tony Awards, including Best Musical, Original Score, Choreography and Orchestration.   The cast recording won a Grammy Award for Best Musical Show Album.   In November 2008, Universal Pictures announced plans to make a film adaptation of In the Heights with Kenny Ortega slated to be the director.  By January 2009, the musical had recouped its $10 million investment and began a national tour in October.  On August 2, 2010, the production marked its 1000th performance.  The whirlwind of success of Lin-Manuel Miranda’s ground-breaking homage to his childhood community ushered in a new era on Broadway and paved the way for musicals that fused more vibrant genres of music and choreography such as Fela! and Rock of Ages.

Since its debut, several members of the original cast have left the show.  Miranda’s last performance on Broadway was in February 2009.   Lin-Manuel is the heart and soul of this musical and with the replacement of several cast members I wondered had the show lost its mojo.  Jordin Sparks would undoubtedly make a great addition.  The “American Idol” winner has great vocal range and is guaranteed to fill seats just from her fan base alone.  But with the musical’s newest cast member sitting out this performance, would the show just be a ghost town filled with espiritus of what used to be?

Once the curtain rose, I was pleased to discover that the spirit of In the Heights is still bursting with energy and is as entertaining as the original incarnation that debuted on Broadway over two years ago.  The torch was well handed from Lin-Manuel Miranda to Kyle Beltran who now plays Usnavi, the narrator who owns neighborhood bodega.  His portrayal of the character is sensitive, funny with a sick flow and cadence that does justice to Miranda’s lyrics and is sure to keep the audience heads’ bopping.  Gabrielle Ruiz was an impressive Nina.  She was so convincing that I almost forgot that she was the understudy.  Clifton Oliver is irresistible as Benny; one can not help but root for him to win Nina’s heart.  Olga Merediz is sensational as Abuela Claudia, the neighborhood matriarch.  Her performance is both endearing and captivating.  And although Merediz is a scene stealer, Andrea Burns commits highway robbery on stage as the vivacious salon owner and barrio gossip Daniela.  With a beautiful voice and hilarious one-liners, Burns transforms a busybody into one of the most engaging characters in the show. Rick Negron and Priscilla Lopez shine as Kevin and Camila Rosario, Nina’s parents.  Their portrayals exude pride and integrity and are relatable to anyone in the audience that has known hard times or experienced parenthood.

The book by Quiara Alegria Hudes was slightly slammed when In the Heights first debuted.  Critics have called the book “overstuffed and oversimplified” and “sentimental and untruthful.”  I find these critiques to be inaccurate.  In fact, I thought the book to be an authentic portrait of life in an inner-city neighborhood.  I know cast In the Heights well.  I am familiar with people who dream of scoring a big hit playing the lottery, desire to move somewhere different, gossip at the neighborhood beauty parlor, struggle through hard times while trying to hold a family together and watch their neighborhood change as decades, generations and traditions change.  Where I am from there are a mixture of salsa, hip-hop, house, reagge and R&B blasting from the windows of cars rolling down the street, the bodega on the corner services the needs of the residents of the block and around the corner I can get my touch-up, manicure and laundry done.  If there is anything to criticize, it would be that book was not a big enough leap for those that may have grown up in a similar environment.  People go to Broadway to escape their everyday lives; it is hard break away when your reality is onstage staring back at you. 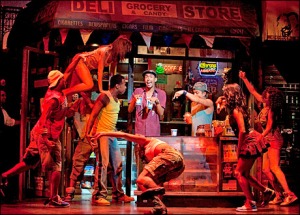 Essentially it is the music and choreography that draws an audience to a musical; the reality that is woven into the story only adds to a stellar production.    At times I wanted to jump on stage, roll my hips and heel, toe right along with them.  The songs are memorable; I find myself humming them sporadically.  “No Me Diga” and “Carnaval del Barrio” are audience pleasers and “Paciencia y Fe” (Patience and Faith) is a showstopper. I wish I could provide 96,000 reasons to go see this musical, but I can only offer three – great music and lyrics, likable characters and high-powered dance moves.  After two years and counting, In the Heights is still a winner.