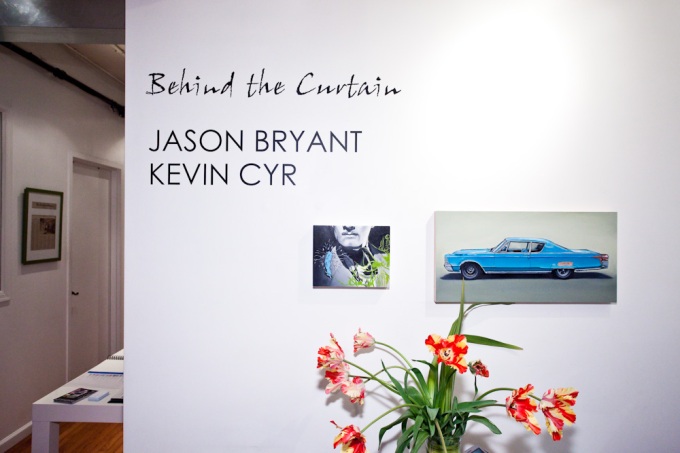 On the 14th, Raandesk Gallery unveiled its first exhibition for 2010 with Behind the Curtain, featuring artists Jason Bryant and Kevin Cyr.  I was introduced to both these artists in 2009 while visiting separate exhibitions at different galleries; from my initial introduction these two men left an indelible impression.  Although both artists showcase contrasting subjects, the realistic quality that exudes from their work makes them a match in art exhibition heaven. And indeed it was fate that brought these two men together having first met as assistants at Kehinde Wiley Studios where they first discussed the possible collaboration of an exhibit.  Thanks to Jessica Porter and Raandesk Gallery, their idea came to fruition.

Jason Bryant’s portraits are inspired by pictures of models, actors and various ad campaigns, although at first sight, you would never know.  Removed from the closely cropped images are the eyes, thus removing the souls, but like an individual stricken with sudden blindness whose senses compensate for their lack of sight, other features of the face are highlighted to reveal the essence of the portrait.   A laugh line here, a wrinkle there, the positioning of the lips and check bones reveal a deeper story than the eyes ever could.   The richness of color coupled with the superimposed skateboard graphics gives the portraits a 3-D aesthetic and the earnest quality of the portraits combined with the whimsical effect of the graphics provide each work with sublime balance.

What is more New York than delivery trucks parked on every corner?  We curse them as we navigate through traffic and scramble to find parking. It is our traffic nightmares that provide Kevin Cyr’s inspiration.  Kevin takes the dilapidated delivery trucks and other vehicles and places them on large panels of wood using striking palettes of color.  Jason Bryant removes the eyes.  Kevin Cyr removes the background scenery making the trucks and cars the single focus in his portraits.  By placing the vehicles behind a solid colored background, the trucks become omnipresent – they could be anywhere.  The vehicles’ details seem to be enhanced and give them a new found charm.

By featuring unconventional subjects, both Jason and Kevin challenge the audience to pay attention to the details – the various fragments within our society and even ourselves that tend to be dismissed.  Each time you peer into their portraits a new layer is exposed, a new detail is revealed and your sense of awareness is heightened.  The exhibit is designed to build on the color and themes of the portraits accomplishing a harmonious synergy against the white and bricked walls and provides a new meaning to the words “parallel universe.”  Bravo to Jason Bryant, Kevin Cyr and Raandesk Gallery for pushing the concept of portraiture into a new, intriguing territory.

Behind the Curtain is currently on display at Raandesk Gallery at 16 W. 23rd Street, 4th Floor until March 12, 2010.  You can also view more of Jason Bryant’s and Kevin Cyr’s work on www.raandeskgallery.com.