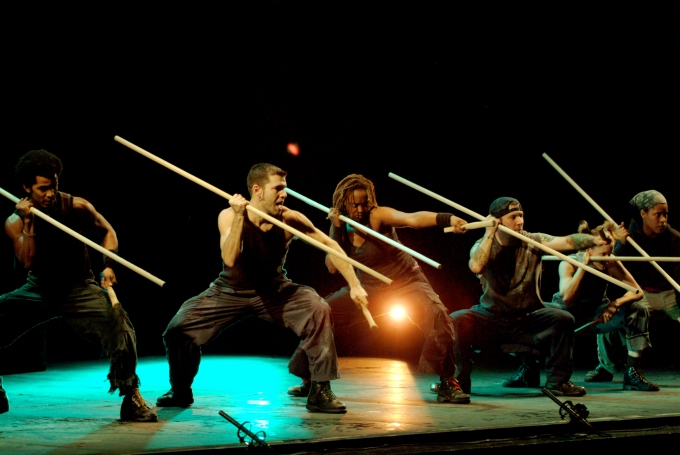 Thumping, bumping, jumping, banging, crashing, ripping, prancing, dancing and running literally, Stomp has been entertaining audiences at the Orpheum Theatre since 1994 and is one of the theatre world’s longest running productions.  It is also one of the world’s most recognizable productions.

Stomp is an anomalous theatrical sensation that unifies its cast and the audience through rhythm, energy and movement.  This non-traditional dance collective was created in the U.K. by Steve McNicholas and Luke Cresswell after first working together in 1981.  In the summer of 1991, a decade after their initial union, Stomp premiered at Edinburgh’s Assembly Rooms.   From 1991 through 1994 the original cast, which had been expanded to 30 members, brought this unique multi-dimensional experience to audiences in Sydney, Hong Kong, Barcelona and Dublin, and also began its run in New York.  Currently, Stomp is still running in the U.K. and Manhattan and has tours in the U.S., Europe and Japan. 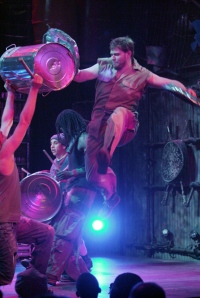 After 19 years abroad and 16 in New York City in particular, Stomp continues to wow audiences with its dynamic brand of performance theatre.  Last weekend I decided to start of my July 4th celebration by finally seeing this production for myself.  Sure, after all the buzz Stomp has created over the years I have seen excerpts of performances on television, but nothing is like seeing the real thing live.  I was not prepared for the stunts I saw.   Talk about spectacle …Macy’s 4th of July fireworks looked like a Lite-Brite exhibition compared to the electrifying commotion displayed on stage. 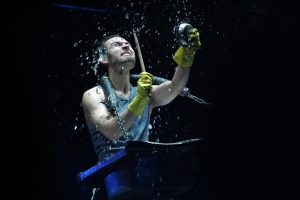 The walls of the Orpheum Theatre were littered with a hodgepodge of discarded items included traffic, subway and street signs,  huge plastic garbage cans, fans, pipes, mannequin tops and bottoms, fans, hub caps, ski boots, car grills and computer keyboards.  The components, dilapidated and carefully hung on the walls, appear to regain their value and look more like a collage about movement and the way humans interact with inanimate objects than a bunch of junk.  The show runs without an intermission and is a mind-bending ride of pure adrenaline.  There is no dialogue, recognizable musical score or traditional choreography.  But there is plenty of synchronized velocity.  The show has a rotating cast and unlike some productions the sum of the cast’s vivacious exchange on stage is greater than its parts.  Using their feet, hands, pipes, sinks, plastic bags aluminum trash cans and lids, newspapers, matchboxes, brooms and Zippo lighters, the cast turn random objects into a symphony of beats even getting the audience involved.  Through clapping and snapping of fingers and hands, the swapping of energy comes full circle and the cast and audience becomes one.

At its core, Stomp is about fusing diversity and commonality. The dancing and music that is created possesses a very tribal feel and through the rhythmic and comedic elements in the show the audience realizes that no matter where we come from, we are all from the human tribe.  A revolution then and a revolution now, Stomp is still one of the most unique theatre experiences on off-Broadway.   Entertaining on multiple levels, great for families as well as couples and singles, Stomp is a shot of fun made for everyone.  After experiencing it for myself, I completely understand why this pulsating production has had such longevity.  If all these sci-fi films are correct and space is the final frontier, I predict Stomp and its many incarnations will still be around clanging on hulls of old spacecrafts and bouncing on crevices of the moon.