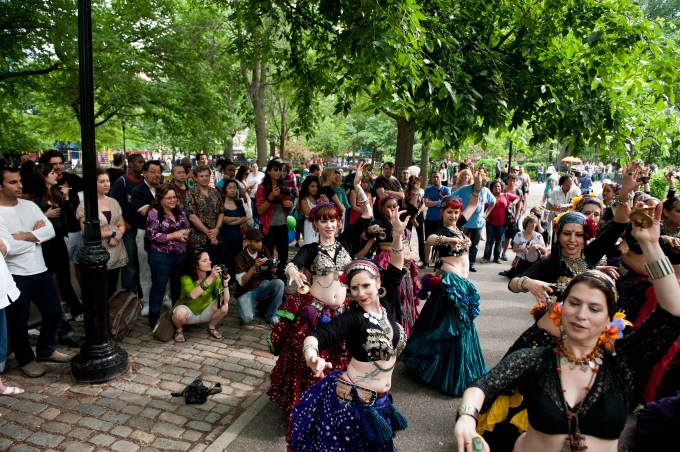 The dancers of New York City were called and they answered with great force.  The fourth annual New York Dance Parade was held May 22nd and was a great kick off to the unofficial start of summer.  Over 160 organizations and 6500 dancers joined together to revel in streets of the Lower East Side for one major mash-up of expression.

Parade goers were entertained by over 60 different styles of dance which included swing, ballet, contemporary, Brazilian Zouk and belly dancing.  Everyone knows that Manhattan is an exquisite tapestry of different cultures.  But New York City is also the birthplace of Hip Hop and House music and the dance styles that are associated with it.  Both Hip Hop and House performers participated in this parade.

Starting at East 21st Street, the dancers partied their way down Broadway, past St. Marks Place and down to Tompkins Square Park where a post parade dance festival was held.  On the main stage performers dazzled the crowd again with diverse styles of traditional and contemporary dance.  House music icon Jellybean Benetiz, one of the four grand marshals for the parade, served the crowd with a set of sizzling, soulful House music as people moved their arms, legs, hips and feet in celebration of a day that is all about individual expression.

Dance Parade Inc. is a non-profit organization.  According to their website, their mission is to promote dance as an expressive and unifying art form by showcasing all forms of dance, educating the general public about the opportunities of dance, educating the general public about the opportunities to experience dance, and celebrating diversity of dance in New York City by sponsoring a yearly city-wide dance parade and festival.  The sponsors for this year included Fela! The Musical, Pacha NYC, Flavorpill and the Lower Manhattan Cultural Council among others.   FAMERS, you can also contribute by texting ‘DANCE’ to 20222 to make a one-time donation of $5 that will be added to your mobile phone bill or you can make a donation via Pay Pal at www.danceparade.org.

As a member of New York City’s underground House community, dance is an intricate part of my life.  Dancing is not only a way to express myself creatively; it is also my spiritual release.  It is my conversation with God, my connection to my ancestors, a fluid form of meditation and the most divine form of exercise that I have ever found.  Through Dance Parade Inc. I have learned that in 2006, a New York State Supreme Court ruled that dance is not a constitutionally protected form of expression, which is a fact I find shocking.  One may not possess the talent to create music or be able to bring dialogue to life, but the gift of movement, whether trained or not is something that we all possess.  Dance is one of the most genuine forms of expression we have.  Every culture or ethnic group that has ever existed had a way to express themselves through harmonious motion.  New York City has many parades, but the Dance Parade is the only parade that gives a vibrant voice to all New Yorkers instead highlighting one particular segment or group.  Watching the diversity of Manhattan communicated through dance is not only riveting, but very necessary.   I hope to see all my FAMERs next year.