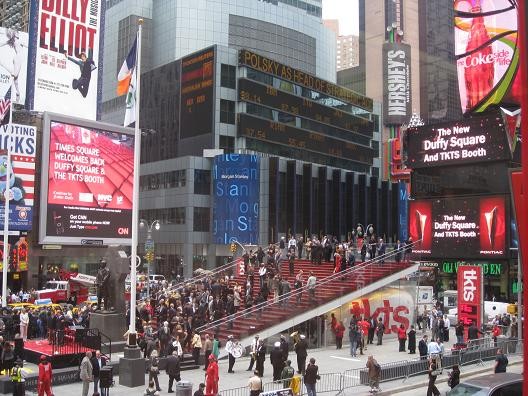 If the five boroughs are the veins of New York City, than Times Square is the heart.  It moves at a pace of 200 bpm and carries the electricity of a bolt of lightning.  For the first time the Tony Awards will allow viewers to be able to watch the stars of Broadway on Broadway.  The 64th Annual Tony Awards will be simulcast live to Times Square on Sunday, June 13th.  This event is a collaboration between the Tony Awards, iXP Corporation and Times Square Alliance.  The simulcast will air on a Clear Channel Spectacolor HD Screen.  In addition to the live simulcast of NY1’s pre-show On STAGE’s Red Carpet to the TONY’s, the Times Square simulcast will feature special guests throughout the evening, including a special appearance by Michelle Williams of Destiny’s Child.  The simulcast starts at 5:30 p.m. in Duffy Square and seats 1,000.  FAMERS go to Times Square and be a part of Tony history.