The root of the word musical is music.  Everybody knows that.  But the word that stands in the shadows of the root word is good.  Songs crammed into a book does not a musical make.  Fortunately, “The Bridges of Madison County” doesn’t suffer from that problem.

“The Bridges of Madison County” originated as a novel written by Robert James Waller and published in 1992.  It stayed on the “New York Times” best-seller list for three years.  In 1995, it was adapted to a movie starring Clint Eastwood and Meryl Streep as Robert Kincaid and Francesca Johnson, the main characters.  The film was equally as commercially successful as the novel garnering an Academy Award Best Actress nomination for Streep.

The plot of “The Bridges of Madison County” centers on two lonely people that find comfort and true love in one another during a four-day long affair that each carries with them for the rest of their lives.  Robert Kincaid is an aloof photojournalist working for “National Geographic.”  Francesca Johnson is an Italian war bride that was looking for an escape when she married her husband Richard and settled with him in a farming town in Iowa.  Richard takes their teenage children, Michael and Carolyn, to a state fair leaving Francesca alone when Robert pulls up in her driveway.  He was sent on assignment to photograph the covered bridges in the area and was lost.  He asks Francesca for directions to the Roseman Covered Bridge. She shows him how to get there and the two hit it off.  The chemistry between them is palpable and after a conversation and dinner the pair begins an affair.  Realizing each other is the love they had been waiting for; they contemplate sharing their lives together.   Francesca decides that she can’t abandon her family, so the two separate and never see each other again. 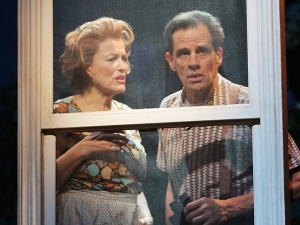 “The Bridges of Madison County” the film is the quintessential chick flick for an evening in with your spouse or a girl’s get together.  The musical adaptation of this story is no exception.  In fact, the music and lyrics of composer Jason Robert Brown only amplifies its beauty.  The longing and vulnerability that Francesca masks is fully exposed in Kelli O’Hara’s performance.  She was joy to watch in “Nice Work If You Can Get It,” the pleasure of seeing her on stage increased triple-fold after seeing her in this production.  Her voice is lovely and the score makes good use of her range.  After seeing Steven Pasquale walk on stage from the audience, I could see why Francesca’s locked desires were released.  He makes for a much sexier Robert Kincaid than Clint Eastwood.  There is no one in the audience that couldn’t understand why Francesca was close to jetting off into the sunset with him.  The synergy O’Hara and Pasquale created onstage was complimented by the score as the two created wonderful harmony together. In this adaptation the music is the third member of this love triangle and the scrumptious singing of O’Hara and Pasquale makes the audience want to root for their romance. Hunter Foster has a sturdiness to him that makes him perfect for the no-nonsense, all-American fellow.  Once again he excels in his portrayal of Bud (Richard).  For me the breakout performance is delivered by Cass Morgan who plays Marge, the nosey neighbor with a heart of gold.  Her solo of “Get Closer” was the hit of the night.

It’s delightful to see a new musical with a score like this keeping the future of the American musical alive with vibrant energy.  However there are a few components of “The Bridges of Madison County” that fell short.  One was the lack of choreography.  When it comes to musicals I believe music and choreography are what make a musical number and assist in driving the book forward.  There is only one number in this production that has choreography, and while the music is stimulating, the lack of movement makes the entire show somewhat incomplete.  Also, throughout the musical the extras are present on stage, sitting in chairs quietly observing.  But from time to time they are moving about, assisting with moving the set around.  At first I was unsure they were just there to move the set or if their presence had a more artistic meaning.  The optimist in me hopes for the latter, for if not the extras would be an awkward solution to the issue of changing the set and its props.  But these are just minor glitches that can be overlooked when one hears the incredible score and the great chemistry of O’Hara and Pasquale.  All and all “The Bridges of Madison County” is a bridge worth coming to.

My first aural introduction to the work of George Gershwin was courtesy of TWA.  His “Rhapsody in Blue” was the soundtrack for their commercial campaign for many years and filled my ears with an explosion of breathtaking sound.  My first introduction to the Gershwin brothers was through An American in Paris.  Again, I fell down into a chasm of musical bliss – and why wouldn’t I – the Gershwin brother’s music and lyrics helped to ink the blueprint of the American standard song.  Everyone, from Ella Fitzgerald to Fred Astaire, has performed their music.   Hollywood and Broadway have been defined by their sound; after all, they have created some of the most memorable songs of the 20th century.

In January, Porgy and Bess, George Gershwin’s last theatrical work, was revived on Broadway.  While the all African American opera is certainly the Gershwin brother’s most controversial work, some of their more popular songs have manifested in the form of a brand new musical with old-school flair.  Nice Work If You Can Get It premiered at the Imperial Theatre, located at 249 West 45th Street, last week and it is a rhapsody in laughter.

Nice Work If You Can Get It is a zany romantic musical set in New York City during the Prohibition era.  It centers on the unconventional, kooky love affair between Jimmy Winter, a wealthy playboy, and Billie Bendix, a hard nose bootlegger.  After leaving a his bachelor party for his fourth upcoming marriage, a saucy Jimmy runs into Billie, who is laying low from the feds while trying to protect her new shipment of booze.  As he attempts to make a pass at her, Jimmy reveals to Billie that he has an enormous estate in Long Island that his family never uses.  Billie and bumbling cohorts Cookie and Duke concoct the idea of storing the demon gin in the cellar of the mansion and the hijinks start from there.  Over a weekend Billie, Cookie, Duke, Jimmy, his icy betrothed Eileen, Eileen’s conservative senator father, his uptight sister, her G-men, a troupe of chorus girls, a police chief and even Jimmy’s mother all converge on the property creating a hilarious adventure by the melody of Gershwin.

Writer John O’Hara once stated, “George Gershwin died on July 11, 1937, but I don’t have to believe it if I don’t want to.”   And after viewing this musical, I don’t believe it either.  The presence of both George and Ira Gershwin were more teeming than ever courtesy of this production.  As with any musical, the music and lyrics are the thing.   And this musical couldn’t have a better foundation.  The book pushes the production along; it is structure that is balanced on the music.  Joe DiPietro created one hell of a comedic story to go along with the blah-blah-blah-blithe musical numbers.  Derek McLane’s lavish set is extremely complimentary to the time period in which the musical takes place and director Kathleen Marshall’s choreography made me want to do the Charleston in my seat. 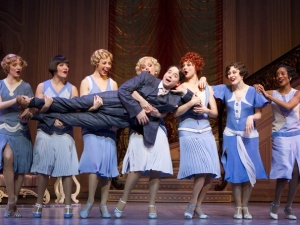 Ever since I saw Matthew Broderick pull one over on his parents and Dean Edward Rooney in Ferris Bueller’s Day Off, I knew he could never do anything wrong with me.  And his choices on screen and on stage have made me stand by that statement.  It’s been over 20 years since Broderick lip-synced to The Beatles and his boyish looks and charm can still convince an audience to buy whatever he is selling.  Watching him on stage can fill any theater with joy.  Kelli O’Hara is delightful.  She and Broderick have great chemistry.  Chris Sullivan gives a spot-on performance as dimwitted Duke Mahoney – Forrest Gump has nothing on him.  Judy Kaye is a pleasure to watch as Duchess Estonia Dulworth, and the rest of the cast provide fascinating rhythm. But if Broadway gave out awards for breakout performances, my vote would go to Michael McGrath.  As Cookie McGee, he gives some of the best zingers of the show.  He is more than just the comic relief, he is the comic godsend. 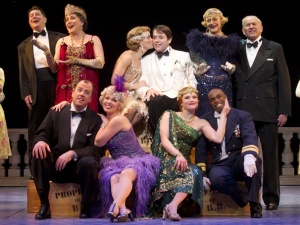 Nice Work If You Can Get It is more delicious than a slice of Junior’s cheesecake.  I could devour it and ask for seconds.  Call me old-school but musicals always showcase the best of what is great about Broadway and harkens back to a time when Hollywood produced royalty.  When a musical hits the mark, it is an undeniable bulls-eye.  During the April 24 red carpet premiere, Sarah Jessica Parker suggested that audiences should, “run; don’t walk” to see this show.  Now perhaps her assessment of this production could be biased since she is married to its star, but in this case I’m in total accord with Mrs. Broderick.  Nice Work If You Can Get It is absolutely the cat’s meow.  It’s fun, fun and more fun – the quintessential American musical done right.