Mistakes Were Made could be an apropos slogan for the Democrats considering the colossal clobbering they received on November 4 in Washington, but in this case Mistakes Were Made happens to be the title of a riotous play written by Craig Wright, directed by Dexter Bullard and showcasing the extraordinary talent of Michael Shannon. 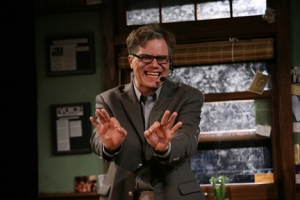 Shannon plays Felix Artifex a man with big dreams and even bigger failures.  He is a B-List (teetering on C-List) Off-Broadway producer whose character can best be described as one part good guy and three parts BS artist.  Felix is obsessed with three things: bringing Mistakes Were Made to Broadway, contacting his estranged wife and feeding is fish to the point of peril.  The audience is introduced to him sitting in a cluttered office filled with scripts, board games and posters of past pedestrian productions.  Believing that Mistakes Were Made will emancipate him from the lackluster life he has led, the slippery slope Felix rides to utter insanity, then clarity begins with him on the phone trying to convince the Hollywood actor du jour to star in Mistakes Were Made, a play based on the French Revolution.  When the actor begins to edit the script, Felix goes into schmooze mode feeding the actor a line of malarkey longer than 5th Avenue in order to get what he wants.   He then does the same to playwright who refuses to change the play.  With all the lines of his telephone blowing up, Felix slides deeper into an abyss of bombastic blunders as he tries to cajole then bully the young writer into altering his original vision all while desperately attempting to reach his wife and back out of a business deal gone awry.

The only thing keeping him sane is the reflective talks he has with Denise, his fish, while overfeeding her.  He shares with her his dreams of making Mistakes Were Made a smash hit and of the mediocre career he has led which will surely be rectified with this show.  The fish is the perfect reflection of his personality.  Her ambition to eat every pellet of food will ultimately lead to her destruction as Felix’s half-truths will lead to his debacle.  His constant reference to the title Mistakes Were Made is suitable considering he is making so many on his road to glory.  Eventually his zealousness leads to an epic explosion of his dreams and the death of his beloved Denise.  As he sinks to the floor in utter despair, I could not help but focus my eyes on the Sorry board game resting underneath a shelf.  Perhaps that game exquisitely sums up his attitude about the events that have transpired.  As the play closes Felix begins to earn the redemption he so desperately seeks as he ventures to repair the damage that he caused by calling the playwright to extend an olive branch. 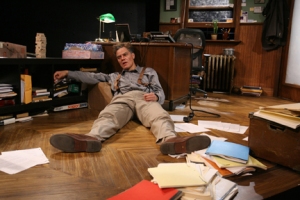 So I ask can mistakes be a good thing.  Absolutely when it involves Michael Shannon, he holds this riveting character study on his shoulders with the same ease as Atlas lifting up the world.  Shannon makes Felix a shyster with a soul.  His desire to become greater and repair past errors is relatable and commendable and the manner in which he does it is amusing as hell.  Fueled by great dialogue, Mistakes Were Made is hands down the wittiest show I have seen all season. It is a comical glimpse of what happens behind the scenes of a production before it hits the stage.  Mistakes Were Made will be playing at the Barrow Street Theatre until January 2, any theatergoer that misses this show will themselves have engaged in a folly that is unforgivable.