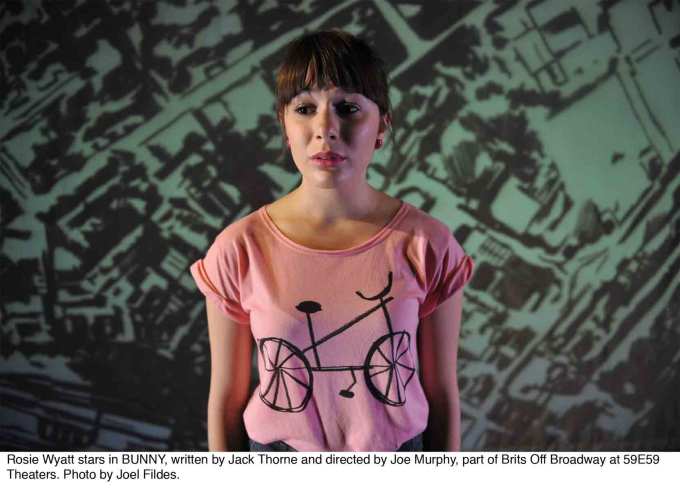 The British are here…the British are here!  And they are residing Off-Broadway.  November kicks off the unofficial beginning of the holiday season, but at the 59E59 Theatres, November is the start of the 2011 Brits Off-Broadway Festival.  From November 1 to January 1, 59E59 Theatres will feature the most innovative productions the UK has to offer.  The festival begins with three titillating solos: Bunny by Jack Thorne and featuring Rosie Wyatt, The Maddening Rain by Nicholas Pierpan and featuring Felix Scott and Shadow Boxing by James Gaddas and featuring Jonny Collis-Scurll.  Each of these expressive narratives can be seen alone or in succession. 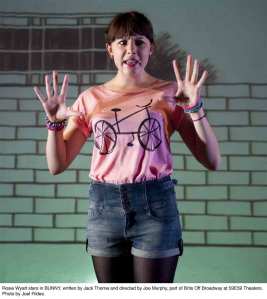 Bunny tells the coming of age story of an 18-year-old girl named Katie.  During a blistering afternoon, Katie witnesses her boyfriend get into a fight and comes face to face with racism, the future of her relationship and the truth about her pseudo contumacious way of life.  Bunny is a superbly wicked fusion of The Breakfast Club and Rebel Without a Cause and includes all the oversized angst of being a teen in the 21st century.  And it is only natural that it would considering Jack Thorne, the writer behind the BBC series Skins, was the mastermind behind this potent monologue.  Rosie Wyatt lends a commanding voice to Gen Y that can be understood no matter which continent you reside from.  She has Natalie Wood looks and Jimmy Dean swagger.  Although there are some areas where Katie tends to ramble, the dissonance works with the theme of disaffected youth.

There is a line in The Talking Heads classic “Once In a Lifetime” that says, “You may find yourself in a beautiful house, with a beautiful wife.  You may ask yourself, “Well, how did I get here?”  It is almost guaranteed that most adults ask will ask that question once in a lifetime.  It is similar to going to bed and waking up on a foreign shore.  The life you dreamed of, or even sometimes did not dream of, never materializes and you are living an existence that you did not sign up for, yet are mechanically doing anyway.  The Maddening Rain explores the journey of a man without a plan that ends questioning the life he carved out for himself.  The protagonist, simply called “The Man,” takes the audience on a diatribe about love and finance and the consequences of losing both during the height of the global economic crisis.   Poignant, zany and very well written, The Maddening Rain is a must see for any thirtysomething individual going through an existential crisis.

James Gaddas’ Shadow Boxing has been billed as, “An emotionally intense and highly physical performance.”  This 60-minute pulsating, pounding drama has received rave reviews from Backstage and www.womanaroundtown.com.

If these three solos are just a sample of what is to come, then I cannot wait to view the rest of the festival.  The east side should be in for some bloody good theater.