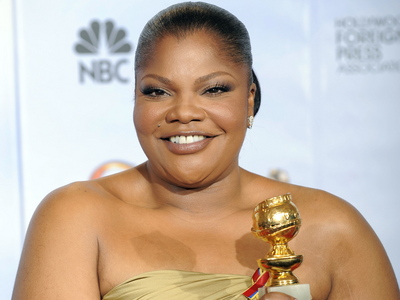 On Sunday Mo’Nique added Golden Globe award winner to her list of accolades after winning Best Supporting Actress, hairy legs and all.  Since the release of Precious, I have debated whether or not to comment about this movie.  The movie, based on the 1996 award-winning novel Push by Sapphire, is set in Harlem and was filmed on location.  Its breakout star Gabourey Sidibe is a New Yorker and was raised in Harlem.  A New York film about a New York girl played by a New York born actress made it perfect for F.A.M.E NYC.  Still, I had trepidation when thinking of writing about this film.

Precious is set in Harlem during the ‘80s.  Anyone living in the city during that time remembers how grimy the city was.  While the film was shot on location, it doesn’t display much of the neighborhood.  Instead the griminess is shown in the character driven story of Claireece “Precious” Jones, played by Sidibe and her mother Mary, played by Mo’Nique.  The mental, sexual and verbal abuse Precious suffers from her mother, whose only obsession appears to be ensuring her welfare doesn’t get cut off, is mind boggling and spine curdling.  To say that Mary is a horrible mother is a gross understatement.  A stray animal has more of a motherly instinct than she.  Instead of protecting Precious from the sexual abuse she receives from her father, she is jealous that Precious has been impregnated twice by her father.  Her jealousy spawns a cyclone of cruelty that could shatter any soul beyond repair.

At the beginning of the film Precious is illiterate and being removed from school because she is pregnant with her second child and begins to attend an alternative school.  It is through the help of teacher, played by Paula Patton, that she begins to learn how to read, how to open up and how to push through her current circumstances to improve her life for herself and her children.

Mo’Nique, known for being one of the queens of comedy, is frightengly convincing as Mary.  The depth of true talent is exposed in this film; her Golden Globe win was more than deserved.  She plays Mary with all the devilishness of a true villain yet she burrows so deep into Mary’s pain that you begin to have empathy for her, asking yourself “What did this woman experience that made her into the monster she became?” 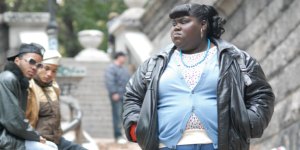 Newcomer Gabourey Sidibe truly embodied the role of Precious.  She gave a performance expected of a seasoned actor.   The role seemed tailored for her and should no doubt have a great career ahead of her.  Sidibe wore the pain of Precious in her expressions, her muffled speech and her walk and showed her transition from hopelessness to hopeful.  No matter how dim the scene, Gabourey Sidibe was a ray of light.

Precious is a film that will stick to your subconscious like hot grits on skin.  It will not go away easy and that is exactly the point. The film should inspire dialog about the myriad topics that are taboo in our society such as incest, abuse, illiteracy, poverty and AIDS – subjects that are especially forbidden in the black community. 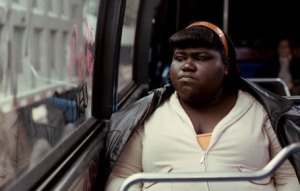 After watching Mo’Nique give her acceptance speech, I realize why I contemplated commenting on this film.  The story of a 16-year-old illiterate, obese, HIV positive girl and mother of two children by her father was an idea that was overwhelming.  After the release of the film, many critics praised the movie as a must see.  While I do agree that the movie is compelling and probably director Lee Daniel’s finest project to date, I am concerned about Hollywood’s propensity to grab from the worst of the black experience.  Indeed, wasn’t the prerequisite of this film The Color Purple?  While it is no secret that the entertainment industry as a whole profits off of the pain of the black experience, the lack of diversity in black cinema is troublesome to say the least.  Are we only compelling if we are HIV positive, abused, illiterate, obese or on welfare?  Isn’t the complexity of living day to day compelling enough without such extreme circumstances?  Why aren’t there more multifarious projects being produced out of Hollywood and why only films like Precious receive critical recognition from the industry?  What message does this send to black screenwriters and directors?

In 2008, Miracle at St. Anna was released.  I found it to be one of the best modern war films I have seen, portraying World War II from the black perspective, a side that is rarely seen.  The film received few critical acclaim and was virtually ignored the Motion Picture Association of America and the other powers that be, which I find to be a gross error in judgment. 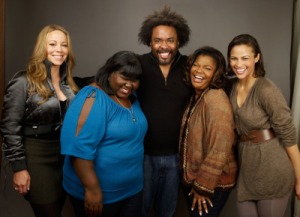 So, with yet another downtrodden story about a black person on the big screen, is Precious truly precious?  I say unequivocally yes.   It is an exquisite film about a despicable set of topics; however it is my hope that with the success of Precious, more dramatic films will be released that covers the entire spectrum of the black experience.