Last year we said goodbye to icons, athletes and politicians.  We also said goodbye to a landmark.  On December 31st, Tavern on the Green opened its doors for the last time in Central Park.  Over 1,000 people from across the U.S. came to take part in the closing of NYC history.

Tavern on the Green opened its doors in 1934 during the Great Depression; it is almost storybook that its saga should end during the Great Recession.   It was known for its grand décor – a restaurant that presented a magical aesthetic for its patrons.

Like most New Yorkers, Tavern on the Green was not one of my favorite eateries.  In recent years the cuisine developed a subpar reputation and the décor was not as splendid as it was in its heyday.  It had become one of those places in the Big Apple that garnered a lot of attention from tourists and bridezillas, and was not necessarily considered a restaurant that a “real” New Yorker would go to.

In New York City restaurants come and go.  A hot new eatery springs up and is all the rage one day and it is cold as day old Manhattan clam chowder the next.  Still, when I learned that the iconic restaurant was closing its doors for good I experienced a sudden pang of nostalgia and regret.  Tavern on the Green was as New York to me as Rockefeller Center, The Empire State Building, Saks Fifth Avenue or The Met.  It was just as an important fixture in Central Park as Strawberry Fields or Wollman Rink.  I developed my deep love for the landscape of the city through my father.  When I was a child, we would go on day trips every Saturday, embarking on a new landmark each time.  It was through my father and those day trips that I developed my affinity for music, arts, culture architecture and style.  As an adult, I have left those landmarks to the tourist to gawk over taking them for granted.  Tavern on the Green was one of those places. 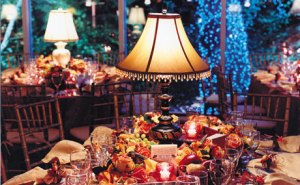 After the loss of the World Trade Centers I swore that I appreciate the landmarks that make NYC so spectacular a little more, but I know realize that I haven’t really lived up to that promise.  As much as New York City is a place of history and landmarks, it is also a metropolis for the latest and greatest.  I had been so busy chasing what is new and hot, I had forgotten about the places and sites that make New York one of the most visited places in the world.  With a New Year come new promises, one of mine is to revisit my childhood and make new memories by visiting more city landmarks before they too disappear and become pages on Wikipedia.

Central Park won’t seem the same without Tavern on the Green, sometimes you don’t know what you have until it’s gone.  Sure, it may have become a little tattered and torn over the years and the food could’ve been better, depending on your taste buds, but nonetheless it was staple and part of New York history.  Items from the famed restaurant have been liquidated and sold; it has been reported that Jennifer LeRoy, manager of Tavern on the Green, is fighting to retain its name so she can open a new restaurant at a new location.  Only time will tell if Tavern on the Green will ever open its doors again, but for now I bid it adieu.

One thought on “Fond Farewell”