My question is did we ever really have him?  The facts are well documented; J.D. Salinger was born January 1, 1919 in New York City.  He attended public schools on Manhattan’s West Side.    In 1940, “The Young Folks”, a short story about several aimless youths, debuted in the March-April 1940 issue of Story magazine.   In 1946, we were introduced to the character of Holden Caulfield when “Slight Rebellion Off Madison”, a Manhattan-based story about an embittered teenager with the pre-war willies, was published in The New Yorker.

Even more famous for his body of work, Salinger became known for retreating from the fame he once sought.  He ordered his agent to burn any fan mail and in 1953 he abandoned Manhattan and the literary world and relocated to a 90-acre compound on a wooded hillside in Cornish, NH.  Ironically, his defiant stance against his own success made him more intruiging.  The idea of a tortured genius hiding from the world is story in itself and there were a few takers wanting to share their accounts with J.D. Salinger including his daughter Margaret, British literary critic Ian Hamilton, and former lover Joyce Maynard. 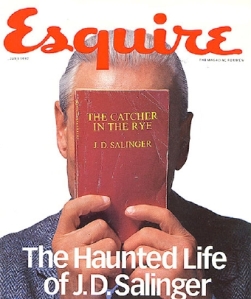 There have been few public figures that guarded their privacy as fiercely as J.D. Salinger.  Perhaps the reason for this was not because of the success of The Catcher of the Rye, but because of the novel itself.  Salinger once stated in an interview, “My boyhood was very much the same as that of the boy in the book … [I]t was a great relief telling people about it.”  Writers often draw from personal experiences to create the alternate worlds that readers transport themselves to in novels and short stories.  It is my belief that with the creation of Holden Caulfield, Mr. Salinger revealed too much about himself.  Maybe J.D. Salinger originally wanted to write the great American novel that would truly make him the real catcher in the rye, saving all the disaffected youth of our society – catching them before the jaded tint of adulthood stains their souls forever.  Maybe the idea of being a modern day Atlas carrying the teen world on his back became overwhelming.  Maybe the only person he ever wanted to save was himself and during his journey to find his truth he left the world with a masterpiece that describes the awkward phase of being a teenager better than any book published in the 20th century, or maybe he just got tired of all the phonies with their meaningless conversations and empty adulation and went on a quest to find something real.  Either way, with his passing J. D. Salinger will forever be a figure shrouded in mystery making him a character we will never forget.