I’m going to say it plain, as Americans we live in a bubble of our own creation.  Before September 11, 2001, how many of us could say we knew anything about Afghanistan, much less locate it on a map.  But after the events of that tragic day, our bubble popped (like it did 60 years before on Pearl Harbor).  Afghanistan, Iraq, the Taliban, Al Qaeda and Islam became the enemy.  Afghanistan was portrayed as a poppy growing, heroin producing, woman hating, tribal fighting, terrorist harboring disaster zone that needed to be cleansed and saved from itself.  But how many leaders…how many superpowers…how many extremists have tried to save Afghanistan from itself, while really serving their interest and not that of the indigenous people?  This question is powerfully and intelligently explored in The Great Game: Afghanistan, now playing at NYU’s Skirball Center until December 19.

The Great Game: Afghanistan is a series of short plays told over three productions presenting audiences with a stark account of this country’s turbulent history from 1842 to the present day.  Broken into one installment per evening or an all-day marathon, The Great Game: Afghanistan breathes new life into the term miniseries.  The first installment titled Invasions and Independence covers the time period of 1842 to 1929.  The first play, Bugles at the Gates of Jalalabad, was written by Stephen Jeffreys. Four buglers outside of Jalalabad keep watch for William Brydon, the lone survivor of the Massacre of Elphinstone’s Army in 1842, while on the other side of the stage, Lady Florentia Sale who was kidnapped in 1842 during the First Anglo-Afghan War reads from the diary she kept while in captivity.    The buglers and Lady Sale recount the British invasion of Afghanistan to impede the Russians and protect India (the crown jewel of their empire), the bribes to tribal warlords which eventually stopped, as well as the gory details of how the Afghan fighters hacked the British army and camp followers to pieces during the massacre.  But the sub-plot of the play is one of intolerance and underestimating the Afghan people.  Bugles at the Gates of Jalalabad closes with the telling of Afghan heroine Malalai, a young woman who helped to rally Afghan soldiers during the Battle of Kandahar.  The second play Durand’s Line was written by Ron Hutchinson and details a fictitious conversation between Amir Abdul Rahman and Sir Mortimer Durand before the signing of the 1893 Durand Line Agreement which refers to the border between Afghanistan and Pakistan and established a line for the British that the Russians were not to cross.   The segment then speeds up to 2010 with Campaign by Amit Gupta.  While trying to create an exit strategy for the British out of Afghanistan, a politician from the UK coalition government tries to coerce a Pakistani intellectual to assist him in manufacturing propaganda that centers on Mahmud Tarzi, considered one of Afghanistan’s greatest intellectuals and modernist.  The final play of Invasions and Independence also features Mahmud Tarzi.  Now is the Time, by Joy Wilkinson, shifts back to 1929 and focuses on Mahmud Tarzi, his daughter Queen Soraya Tarzi and son-in-law King Amanullah Khan as their escape out of Kabul is threatened when their Rolls Royce gets stuck in the snow.

The second installment of plays is titled Communism, the Mujahideen and the Taliban and covers the time period of 1981 to 2001.  Communism, the Mujahideen and the Taliban begins with Black Tulips by David Edgar, which backtracks the Soviet war in Afghanistan from 1987 to 1981 from the USSR’s point of view.  While constantly reminding new soldiers that “They had been invited to Afghanistan,” various Soviet officers give newly deployed soldiers a pep-talk as to why their intervention is necessary.  Wood for the Fire by Lee Blessing zeros in on two CIA operatives as they work with Pakistan’s Inter-Services Intelligence to supply the Mujahideen with weapons and terrorist training to oppose the Soviets.  In Miniskirts of Kabul by David Greig a British journalist imagines a meeting with President Mohammed Najibullah while he is on house arrest in the UN compound in Kabul in 1992.  They discuss the Spice Girls, women being allowed to wear miniskirts, his beliefs and why he refused to go into exile once his regime had collapsed.  Communism, the Mujahideen and the Taliban ends with The Lion of Kabul by Colin Teevan showcasing the history Marjan, the one-eyed lion in the Kabul Zoo as told by a Taliban leader as a female UN director and her interpreter wait to find out news about two UN aid workers.  Upon learning the workers have been killed, the UN director reluctantly allows the Taliban to render punishment to the men responsible for the aid workers’ deaths, which happens to be feeding them to Marjan. 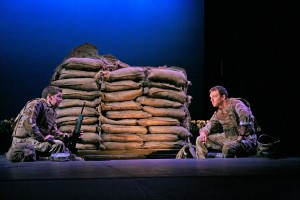 The third segment of The Great Game: Afghanistan is Enduring Freedom which spans from 2001 to the present day.  Enduring Freedom opens with Honey by Ben Ockrent and focuses on a CIA agent who tries to enlist the help of Ahmad Shah Massoud right before his assassination on September 9, 2001.  The title of the play refers to the “honey pot” Massoud was promised for his assistance.  After Massoud is assassinated, footage of the World Trade Center attack on 9/11 is shown.  Following the 9/11 attacks The Night is Darkest before Dawn by Abi Morgan centers on an Afghan widow that returns to her village to re-open her deceased husband’s school and recruit her niece as a student.  On the Side of the Angels by Richard Bean is the penultimate skit and features an aid worker who is forced to get involved in Afghan politics after a girl is betrothed to an older man to settle a dispute.  The play comes full circle with Canopy of Stars written by Simon Stephens.  It centers on two British soldiers guarding the Kajaki Dam; they exchange views on military intervention in Afghanistan right before a battle.

The Great Game: Afghanistan and its myriad of carefully crafted skits reveal that the true game played in Afghanistan was an exhaustive, expensive game of chess in which the pawn became such a powerful player that it began to usurp control from the strategists setting the rules.  The realities of the effects of war and the manipulation behind it become all too real after watching The Great Game: Afghanistan.  Whether viewed in its entirety or in segments, this play gives its viewer as much as it takes away.  It represents what is great in theater; it expands your consciousness and challenges your perception of the world we live in.   Upon walking into this production your views about global terrorism, 9/11, Islam may be clear, but by the end of the play your perception may be a little muddled.  The Great Game: Afghanistan is the equivalent to walking into a snow globe that pops while shaking.  Before the shaking all your ideas are calm, resting in the annals of your mind, but afterwards the certainty of your thoughts are scattered and can never be collected back into the bubble.  It my sincere hope that The Great Game: Afghanistan will return to NYC soon so that all New Yorkers will have the opportunity to witness this stimulating work.  The actors, who play multiple roles, are intense; their dedication to the entire production exquisitely shines through in every play.  In the times we live in, The Great Game: Afghanistan is a must see –it is a mental marathon, but one well worth running.