The first time I met Skot Foreman was during a Purvis Young exhibit at Gallery Bar in 2008.  I was pulled in Purvis’ world of struggle and redemption. I spoke with Skot briefly that evening and left thinking how Purvis Young had a real champion in Skot Foreman; he was someone that would fight to ensure the legacy of this artist (who was in failing health) would be properly maintained and not exploited.  But as I got to know Skot I came to the conclusion that it was not just Purvis that made him zealous.  Skot Foreman is passionate about three things: his two dogs Cassie and Reva and art.  Another thing I learned after getting to know him over the past two years is that Skot is a rebel.

Unlike the famed General Sherman, Skot made his march in reverse conquering one city at a time.  He opened Skot Foreman Fine Art in 1994 using various locations within the greater Miami area.  In 2001, he moved to Atlanta opening up a space in Castleberry Hill, the city’s gallery district.  Skot moved to Manhattan in 2004 and opened a gallery first on the upper eastside.  Currently, he is settled in Tribeca.  “I always had a connection to New York,” he states.  He admits that his journey to “the hub of the international art market” was one filled with baby steps.  Originally wanting to migrate to New York after 9/11, Skot re-thought the notion and moved three years later.   “I have always been one to swim upstream,” he states.  Skot called his initial move to the upper eastside “strategic,” and feels that living downtown is more indicative to his personality.  “It’s more creative and laid back…more on the DL,” he says, “There is a new discovery around every corner.” 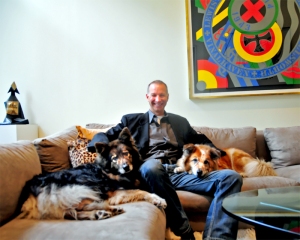 One of those discoveries happened to be situated underneath Skot’s Tribeca home and would eventually lead to an innovative union between Skot Foreman Fine Art and fashion brand Grown and Sewn.  Skot was introduced to Grown and Sewn’s founder and head designer Rob Magness through Rob’s wife Sara, an award- winning interior designer.  Over a glass of wine they discussed the space that would become Grown and Sewn’s home, 184 Duane Street.  Both had the desire to use the space for their creative endeavors and Sara suggested collaborating.  “Rob and I looked at each other and you could see the light going off in one another’s head,” he says.  Skot believes the synergy between he and Rob created magic.  “The word that keeps coming back to me is authentic because so many people that do walk in the space seem to respond to the fact that we’ve combined art and craft, which is truly a human thing but I think it’s probably been lost through the later half of the twentieth century and we wanted to rediscover that.”

Skot Foreman Fine Art amasses contemporary art of the 20th and 21st centuries and features the works of prominent artists such as Pablo Picasso, Henri Matisse, Purvis Young, Keith Haring, M.C. Escher and many others.  “I try not to show artists that are the flavor of the day,” he asserts, “I try to show artists that have stood the test of time.  It starts with a chord that artist may have struck with me so it’s hard to remove any personal bias because if I don’t believe in it, if I don’t have conviction, then how can I share it with a friend or turn a collector on if I’m not passionately behind the work.”  Skot believes his penchant for pop art stems from his surroundings growing up in Florida and recalls being cognizant of signs, billboards and other media.  He also has a deep appreciation for artists that can take a sheet of paper and illustrate.  “I’m a little bit old fashioned in that regard,” he shares, “I like [artists] who have got some chops, knows how to draw, came up through the ranks and paid their dues.”

Skot understands that artists are the visionaries of their times, no matter what genre one may choose t, which brings me full circle to how Skot and I met:  a showing of Purvis Young’s work.  Skot loves to “turn people on” to his work.  He describes Purvis’ art as shamanistic; indeed there is an other-worldly aesthetic to his pieces.  Skot and Purvis (who died in April) shared a friendship that spanned over 20 years.  One of Skot’s favorite stories about Purvis Young involves another shaman of sorts, the late rapper Tupac Shakur.  “I sent Tupac a portfolio of Purvis’ work to look at.  I wasn’t there; it was through a third party.  Tupac opens it up, starts looking at it, eyes start bugging, closes the portfolio up and says, this shit is fucking dope,” he recalls as we both begin to laugh.  It is no surprise to me that kismet made Skot Foreman one of the preeminent collectors of Purvis Young’s work. Besides both men being Floridians, Purvis’ work projects a naked genuineness that obviously comes from within.   It is that same frank verisimilitude that resonates from Skot’s demeanor and is the reason why they were kindred entities.

When it comes to the art that has been reflected during first decade of this millennium, Skot discloses that he has not been a fan of the new conceptual, instillation media that is meaningless but relies on the story behind it or the process of creation to hold its validity.  He is not concerned with the back-story of a work of art, and would like to see a renaissance of the fundamentals of drawing and painting develop.  “Everything is so media or marketing driven, and I think that’s probably why one day there is going to be a return back towards things that are authentic and accessible.   Things that are real.  People can see through all the smoke and mirrors.”

One thought on “To Be Real”