Rarely in modern history has the enormity of an event made the entire world pause, witness history unfold and realize that the paradigms of society have shifted.  No one with the ability to recall memories will ever forget where they were on September 11, 2001.  Like most Americans, I read about the attack on Pearl Harbor and thought an incident like that would never happen in this country again.  Sure, I had grown up in the dawning of the age of terrorism – viewed bombings and other attacks happen on the nightly news as if I was watching a scene from a movie.   “Those were other countries,” I thought, “They would never try anything like that here.”   I willingly shrouded myself with a tapestry of naiveté and overconfidence.

On the morning of September 11, 2001 I, like most Americans, were on my way to work.  While driving to my job, I listened to the Star and Buckwild Show on Hot 97, as I did every morning.  As I pulled up to my building, I heard Star say that a plane flew into one of the World Trade Center towers.  Immediately, I thought it was an obscene joke, but when I arrived at the floor of my office, others had heard the news too.  Most of us assumed it was a single engine plane that somehow went off-course.  We went to the window, looked at the picture perfect blue sky and Manhattan skyline and wondered how anyone could not see the Twin Towers.  Then we heard about the second tower being hit, then the Pentagon, then the downed airplane in Shanksville, PA, we even heard rumors that the Sears Tower in Chicago had been hit.  As we looked around, searching for a sense of normalcy in each other’s faces, one single thought resonated through our minds – this is real.  America was under siege, and worst of all, the attackers were using our commercial airplanes to complete their mission of horror.

I and other members of the company raced to the media room; helplessly and frantically we watched as the Twin Towers smoldered and reports came through that people were jumping from the towers.  Then gaps and screams crowded the room as the South Tower disintegrated before our eyes.  The screams became louder as the North Tower fell.  We watched the gargantuan plume of smoke that once was the mighty World Trade Center towers engulf the area with an eerie shade of gray as people ran to escape it.  We hugged and cried trying to find solace.  We pressed our faces against the window watching the cloud of death rise into the blue atmosphere.  Suddenly terror came to our building – a bomb threat was called in.  After all we had witnessed, there was no way we were going to have an orderly evacuation.  We ran as if our lives depended on it.  No one was taking any chances, the sky had literally fallen like an old children’s fable, and danger was thick and palpable.    We poured out into the parking lot, shaken and frighten like abandoned children. How could this happen so quickly?  Who would do this to us? Why would anyone target civilians?  Questions that lingered in the backs of our minds that soon would be answered, but at that moment, all any of us wanted was to go home and be with our loved ones.

Upon arriving home, I crawled on my bed and watched as the first responders signals beeped (the echoes of those beeps still haunt me).  I knew each beep was a life begging to be saved and my heart broke as the beeps began to fade.  My boyfriend, my parents and I watched as 7 World Trade Center fell.  The next day, we returned to work like zombies.  My company, a telecommunications company, needed volunteers to help hand out cell phones.  I volunteered; I had to do something.  The days, weeks and months following that tragic day was a haze.  Everyday there were funerals on the news.  A co-worker, whose husband worked at Cantor Fitzgerald, had died.  The streets were littered with flyers of missing people.  Walking in New York City at that time felt like we were muddling through a post-apocalyptic ghost land. 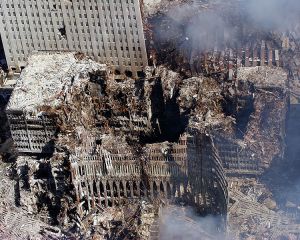 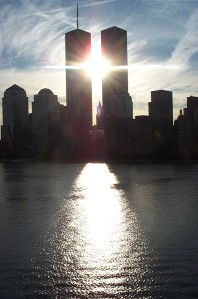 Ten years since 9/11, soon it will be 20, 30 and beyond.  I have read about September 11, 2001 in my niece’s and nephew’s history books as if it was Pearl Harbor.  I have always had a love for New York City, and the events of 9/11 only increased that love.  When I conceived the idea for F.A.M.E NYC, I know in the back of my mind that part of the reason I did so was because of 9/11.  Ten years later, New York City still stands strong and as long as I can, I will always report about the city I love and revolve in.