Every Sunday those who are filled with the spirit, regardless of their denomination, attend church.  In the Baptist faith, there is a part of the service called devotion.  During this time, parishioners and visitors stand before the congregation and give their testimony, which generally consists of a narration that details the trials and tribulations that they have gone through and how they have overcome them (usually with  the assistance of god).  I spent season after season of my childhood in church listening to people’s testimonial; none of them were as dynamic as the affirmation I received after watching RENT.

There is no doubt in my mind that Jonathan Larson’s most seminal piece of work was and still is the ultimate testimony of a life lived.  The story behind RENT is beyond legendary.  The fact that Larson died at 35 of an aortic aneurysm the night before its off-Broadway premiere in 1996 is a detail that epitomized the phrase “life imitating art.”  Like the character Angel, who looked after his friends after his death, it seemed as if his spirit departed this earthly plane so that he could be a guide, lifting this production on his shoulders, as he did in life, and ensuring that his labor of love lived on.  A labor, and a testimony in itself, Larson wrote RENT as a tribute to the friends he lost from AIDS.  And how his tribute has grown, becoming an entity of its own, when the rock opera completed its final Broadway performance on September 7, 2008, it had become the ninth longest-running Broadway.  Subsequently, it developed legions of zealous RENTheads, created several incarnations with American and European tours.  It even spawned a school edition (which toned down the language and other elements of the show) and a 2005 movie which featured the majority of the original Broadway cast. 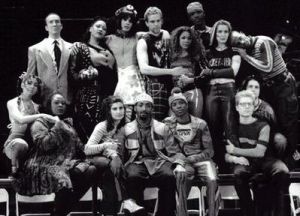 Now RENT has returned back to its Off-Broadway roots – full circle for a production that had been touted as the musical that spoke to Generation X the way Hair spoke to those who grew up in the 60s.  I have always believed there is a time and season for everything.   When RENT made its Broadway debut on April 29, 1996 at Nederlander Theatre, I had no desire to see it, despite the ravings of my colleagues.   I never listened to the soundtrack, nor had I watched one scene from its film adaptation.  Perhaps it was because I was too much of a rebel back in the 90s to believe anyone had my generation pegged.  Perhaps it was because I lost one brother to AIDS in 1988 and another in 1997 and had no desire to return to feelings of despair, hysteria, anger and grief of the AIDS epidemic of the late 80s and early 90s.  Perhaps it just was not my time to see it.  Suffice to say when I took my seat at New World Stages, I was a true RENT-virgin and what a cherry popping!  I sat behind a row of RENTheads who were already singing the songs before the performance started.  But once it did, they were right on queue, from the first “Voicemail” to the last.  Putting the production within the context of when it originally premiered, I understood how RENT was ahead of its time and definitely ushered in a new age of American musicals, laying out a blueprint that productions like American Idiot and Fela used.  What I was not prepared for was the flooding of tears that erupted from my eyes as I stood to give the cast the standing ovation it most definitely deserved. 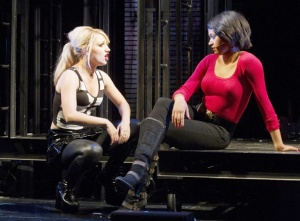 There is no doubt that RENT is a masterpiece in any incarnation.  After I pulled myself together, I went home and immediately scoured the internet to view the movie and whatever videos I could find of the original cast.  Despite being overtaken with emotion by this powerful theatrical force of nature, the reviewer in me still needed to make comparisons.  Without question the shoes the current cast had to fill were larger than the Grand Canyon.  And they do so in an impressive scale, I did not feel as if I had been cheated by not seeing RENT on Broadway or in the movies.  The spirit of Jonathan Larson is still present and when they lifted there voices to sing every note, they did so with the sincerest passion to live up to the promise of the music and still make the character their own.  They delivered a dose of fabulosity that I will soon not forget.

To wax on about how wonderful RENT is would seem futile and unworthy of what I experienced.  Everyone knows it is phenomenal – a tour de force of the digital age.  Perhaps the best attempt to sum up RENT’s continual relevance on our culture is to give my testimony.  RENT hit me with a direct blow to the heart and as I cried I knew why I never saw this rock opera before.  I am a member of the bohemian class.  The group I belong to is the underground house community of New York City.  Some of us have belonged to this community for decades, others for a few months. Like the protagonists of Larson’s greatest musical production, our struggle has been to find the freedom to be ourselves without judgment from the outside world. Whether it has been The Paradise Garage, Sound Factory Bar, Body & Soul, Shelter or Soulgasm we have given our sweat, blood and spirit to the dance floor, finding our true selves in the bass and treble of the speakers, making connections with people who could only understand us because they were like us.  Now my beloved community seems to remain in an in a state of disrepair.  I have watched fellow members become ill and die.  I have viewed members dismantle precious relationships through petty actions.  I have witnessed New York City attack my culture, deeming it unworthy because we do not want to spend hundreds of dollars for bottle service or pose behind a velvet rope. As I watch cast sing “no day but today,” in the final scene, I realized RENT was created during the height of the New York clubbing experience.  I began to understand how the mistakes of our past are shaping the consequences of today and if Mimi got a second chance, maybe we would get a second chance too.

RENT is to me what Marvin Gaye’s What’s Going On is to my mom and like that great musical work, will always be relevant.  Sure, some who go to see it may be in their twenties and can fully comprehend the idea of not selling out.  Others may be older and view it with through the reflection of hindsight, recognizing past mistakes and knowing they may have abandoned some principles to pay a mortgage or a child’s school tuition.  While the rest, will just hear the wonderful music and lyrics of Jonathan Larson and just be satisfied with that.  Because in the end, after you strip away all the back stories the greatest testimony of this rock opera is the music and because of it, RENT will never be evicted from the hearts and minds of anyone who sees it.

9 thoughts on “A Testimony for RENT”