Besides the cavalcade of characters that sprang from the world of Disney, Walt Disney was a virtuoso at adapting popular children’s stories into theatrical extravaganzas that were amalgamations of color, sound and joy.  Mary Poppins was no exception.  Based on the book series created by P.L. Travers, the 1964 film was written by Bill Walsh and Don DaGradi, with songs courtesy of the Sherman Brothers.  Shot on a set in California, Disney’s Mary Poppins was based primarily on the first book, starred Julie Andrews and Dick Van Dyke, combined animation and live action, churned out some of Disney’s most popular tunes and won five Oscars.  Although under the strict supervision of Travers, Disney also managed to transform the character of Mary Poppins from a no-nonsense, frigid au pair into a beautiful, cheery governess, as well as delete two of the four Banks children, change the setting from the 30s to the Edwardian era and cajole suggestions that Bert and Mary could have been more than friends. 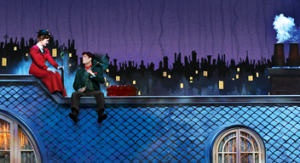 Along with creating indelible imprints on American and pop culture, Disney has also found tremendous success adapting their films into stage productions.  Once again, Mary Poppins was no exception and like its box office predecessor, the musical also received an overhaul.  Although Disney wanted to procure the stage rights, they were unsuccessful.  In 1993, theater producer Cameron Macintosh acquired the stage rights and in 2001, he and Thomas Schumacher, the head of Walt Disney Theatrical, began talks on a possible collaboration, which ensured songs from the Disney film could be used. With both sides in accord, a preliminary outline of the show was written in 2002. The stage production of Mary Poppins included aspects of the film and the book series with the book written by Julian Fellowes.   The music and lyrics of the Sherman Brothers received an additional boost from composer George Stiles and lyricist Anthony Drewe, giving the musical a more modern feel with the music helping to move the narrative along.  Also the lively, magical caregiver was brought back to her London roots.  The West End production premiered in December 2004 and garnered two Olivier Awards before floating overseas, opening at the New Amsterdam Theatre on Broadway in November 2006.  Almost five years later, and the carpetbag totting supernanny and the music she inspired are still enchanting men, women and children on Broadway and all over the world with various tours.

I had not seen the film version of Mary Poppins since I was a teenager, but as with most Disney movies, the Supercalifragilisticexpialidocious classic left a huge impression, becoming part of my adolescent experience as well as turning me into a life-long fan of Julie Andrews and Dick Van Dyke.  Although it had been decades since I saw the film, I remembered it enough to realize that the stage version of Mary Poppins had received an upgrade.  It was not a complete skin-pulling facelift; instead the musical had more like a treatment of Botox – a few subtle injections that change the aesthetic of the musical for the better.  By integrating additional books from the series, the plot had a plenteous storyline making it more engaging than its film predecessor.  Staple numbers like “Jolly Holiday,” “Chim Chim Cher-ee,” “A Spoonful of Sugar,” Let’s Go Fly a Kite,” “Feed the Birds,” “Step in Time” and “Supercalifragilisticexpialidocious” are performed in the musical and are cleverly interwoven throughout the course of the upgraded production.  For instance, “Spoonful of Sugar” is performed after the children create a disaster in the kitchen right before their mother is to receive guests for a luncheon, and “Supercalifragilisticexpialidocious” integrates a lesson about the importance of words.  Songs like “Brimstone and Treacle,” “Playing the Game” and “Anything Can Happen” were wonderful complements to the existing Sherman Brothers tunes, even better suited than the original compositions of the film that were removed. 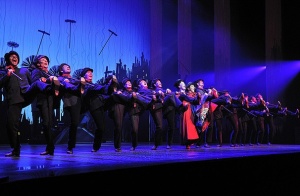 But of course the ultimate test of whether or not Mary Poppins could stand up to the film was the casting of Bert and Mary.  One of the roles Julie Andrews is most famous for is the role of Mary Poppins and Dick Van Dyke made being a lowly chimneysweep seem as cool as a barrister.  The actors attempting to fill these roles on stage had a tremendous shadow following them knowing their faces would replace the image set by these two iconic television, film and stage legends.  Laura Michelle Kelly and Gavin Lee originated the roles of Mary and Bert on the West End, and subsequently played the roles on Broadway, both leaving and returning back to the show.  Mary and Bert are the heart and soul of the show; I believe the show’s long running success, surpassing Pippin to become the 30th longest running show in Broadway history, is a testament to the awesome performances of these actors.  They carry the heaviest burden and they do so with the ease of Atlas.  Gavin Lee is marvelous as Bert.  He almost made we want to say, “Dick Van Who?”  Actress Catherine Walker played the role of Mary during the evening in which I attended.  Walker’s voice is utterly ravishing.  Indeed the entire cast is a pleasure to watch.  Similar to the film, the choreography is traditional with touches of technology fused in allowing Bert to walk on the ceiling and Mary to glide above the audience.  Although not as dare-devilish or as splashy as some of the choreography on Broadway, Poppins is done with air of class, which is always en vogue and can be enjoyed by young and old alike.   Numbers like “Step in Time” and “Supercalifragilisticexpialidocious” are awesome crowd pleasers that would have anyone rise to their feet to give a standing ovation, and “Feed the Birds” is still my favorite song, bringing water to my eyes each time I hear it.  While I would not recommend any parent bring a little one under the age of six to see this musical (there are a few scenes in the show that may be too scary for them) Mary Poppins and the lessons she shares through song would bring the kid out of anyone.  Cameron Macintosh and Walt Disney Theatrical have most definitely succeeded in adding another winning chapter in the story of Pamela Travers most famous character; even a hard taskmaster like Travers would be pleased. The stage version of Mary Poppins surpasses the film and still draws a full house on Broadway.  It is a heaping tablespoonful of fun – deliciously delightful in everyway.

(Posted photos are of Laura Michelle Kelly in the role of Mary Poppins.)