During the spring, most of us work like Rocky Balboa training for a prize fight in order to look desirable during New York City’s annual humidity festival, also known as the summer.   But as sure as The Empire State Building lights up in the evening, the temperature cools, making way for fall.   Bikinis, mini-skirts, sandals and halter tops are replaced with jackets, sweaters, corduroys and knee-high boots.  The quest to maintain that summer figure may become more difficult as fall gives way to winter.  New York City is filled with gyms, but spinning on a bicycle going nowhere, posing in yoga positions or doing repetitions on a weight machine are not the only methods to staying fit and agile.  Dancing provides all the sweat and none of the routine of regular workout and The Ailey Extension offers both.

Alvin Ailey American Dance Theatre is best known as being the “Cultural Ambassador to the World,” but in New York City AAADT is an institution.  Founded in Manhattan in 1958, Alvin Ailey American Dance Theatre and its creator changed the landscape of American modern dance.  One of Ailey’s signature ballet, Revelations, is considered to be the most often seen modern dance performance.  Each time I watch this extraordinary work, I sit in awe and sometimes believe that I can perform the choreography.  After my brief moment of delusion, I realize I can never move and accentuate my body like someone who has devoted their life to dancing and performing, but I can learn. 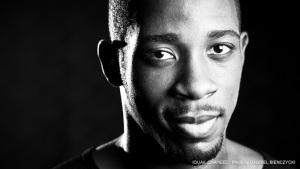 “Mr. Ailey understood that people need to be engaged and connected in a way that they understand,” states Iquail Johnson, one of the instructors at The Ailey Extension.  And through The Ailey Extension everyone is able to partake in a piece of Alvin Ailey’s legacy, experiencing the opportunity to comprehend dance the way he understood it.  Created in 2005, The Ailey Extension offers over 80 dance and fitness classes each week in a variety of different styles and skill levels.  The teachers are all specialists in their field.  Iquail Johnson is a Philadelphia native that began his career in dance at 13 after being accepted to the Philadelphia High School for the Creative and Performing Arts.  He continued his studies with PHILADANCO, Philadelphia Dance Company, and earned scholarships to attend The Julliard School, The Ailey School and The Paul Taylor School among others.  After receiving a Bachelor of Fine Arts in Ballet from the University of the Arts and a Master of Fine Arts from SUNY Purchase, , Iquail has worked with dance companies including Ronald K Brown/Evidence, The Fred Benjamin Dance Company, and Subtle Changes.  He has also appeared on Broadway in Hot Feet, The Lion King, and Purlie and is the Founding Artistic Director of Dance IQUAIL!

Iquail began teaching Horton, the dance style Alvin Ailey used as the foundation of his choreography, at The Ailey Extension in 2006.   One might think that a dancer of his caliber would be climbing the walls trying to teach a roomful of nonprofessionals how to properly execute Locomotions, “Accented Runs,” “Hip Pushes” and “Leg Slices,” but Iquail enjoys working with the variety of students that pass through his class on a weekly basis.  “The most interesting thing is to see the development,” he says.  “You can see when they come in if they have no experience.  But no matter where [the students] come in, at what level, you can always see the growth that happens, you can see the ‘a-ha’ moment, when finally after taking classes for three months, six months or even a year they start to get it and their body starts to understand it. And that is the beauty of it.  When the body holds on to it, it is something that is undeniable,”

As a trained dancer, Iquail physique is the embodiment of perfection, but he also believes that dance is a great alternative to traditional exercise regiments.  “Dance is a fabulous way to introduce people to movement.  No matter what kind of culture you are from, movement is a part of our everyday life, even if it’s a pedestrian walking down the street, he says.  “And the physical aspect is so integrated in dance,” he continues, “that its fun. You’re not thinking ‘Oh I have to do twelve more or I have thirty minutes.’  Also you are building cognitive skills, you’re developing comprehension skills, you’re coordinating your body, so at the end of the day you’ve developed your physicality, your mental state and your awareness of other people, and you packaged it with grace and elegance.  You can’t get that working out.”   When asked what technique he prefers and which technique should a new student learn first, Iquail jokingly replies, “Horton of course.”  “It is a fabulous technique for a lot of different reasons,” he says, “One, it wasn’t created with one person in mind. A lot of modern dance was developed for one person, the creator of that particular style.  Lester Horton decided not to let himself be the vehicle to express his technique, he used all the dancers around him, so that way he could make the technique work for no matter what body type you have.”  But if a student comes into The Ailey Extension taking Horton, they do not have to stick with it.  The staff and teachers at The Ailey Extension want you to feel connected to whatever classes you decide to take.  With that concept in mind, The Ailey Extension has an open door policy where students can go from one class to the next, trying them out until they find a class and teacher that works for them.

After my brief conversation with Iquail, it was time for me to see him in action as he taught his Wednesday evening class.  As I walked through the halls to the classroom the richness of spirits that have passed through this hallowed dance institution was almost tangible and completely entrancing.  In fact, as soon as you step through the doors it is as if the weight of day drops at your feet.  The more you walk, the more negativity is removed until you feel as clean as a newly christened baby.  I like to think of myself as a spirit dancer, also known as a free-stylist.  I hear the beat, and whatever comes out, comes out.  I thought I could pull the journalist card and sit back and watch the class, but Iquail would have none of that.  Of course having no formal training, I initially got tripped up by the terminology and stiffened up with the knowledge that was not dancing in a dimly lit room with strobe lights bouncing off the walls, but Iquail’s patience allowed my muscles to relax so that I could receive the dance.  Iquail is no Debbie Allen banging the floor with her dance stick, but he is not Mr. Softee either.  He pulls every inch out of you, making sure that you are extending and giving all you can to the movements.  By the time my hour was over, I realized I had sweated just as hard and felt just as sore as if had ran a few miles or had danced for five hours.  I left the class with a soul as rejuvenated as any time I danced a 10 -hour marathon at Club Shelter.  As I walked out, I thought about something Iquail said about the legacy of Alvin Ailey, whose presence could still be felt in the building.  “I think it has to do with taking dance away from dance.  It has to do with the fact that [Mr. Ailey] touched people.  And that everything he did was as a result of selflessness and generosity, and people gravitate to that, unbeknownst to them.  His generosity was so strong that people can’t explain why when they go see Revelations, that it is something they have to return to see over and over again for the last fifty-two years.  Now when you go see something fifty-two times, you’re like ‘Ok, now I’m tired,’ but to see something over and over again for fifty-two years, it becomes something that is transcendent. And I think that is why [AAADT] is such a global brand, because it is not about the dance.  Dance is just a vehicle to tell people we are all connected. The dances are the same steps; it has something to do with the spirit.”  What I learned is The Alvin Ailey Extension is more than just a place to learn dance steps or lose weight; it is a sanctuary to refresh your soul.  The perspiration is just a bonus.

11 thoughts on “Flex and Tension with The Ailey Extension”