Rarely has there been an individual that has broken out of the world of reality television quite like Christian Siriano.  Perhaps it is because he is uber talented and at the tender age of 25 has the potential to be fashion icon.  Oprah Winfrey has stated that Christian’s designs are, “works of art.”  And mentor Tim Gun has said that he is “the next great American fashion designer.”  Although Christian did not begin his foray into the world of fashion in New York City, his career has certainly flourished here.  Manhattan is undoubtedly one the Meccas for fashion and dozens of designers and models migrate to New York City to begin turning their dreams of stardom into reality.  Like the song says, if you can make it here, you can make it anywhere.

Before Project Runway, Christian made wedding gowns for private clients and briefly interned for Marc Jacobs.  After joining the cast of the fourth season of Bravo’s hit series Project Runway, Christian won over the viewers with his edgy coif, use of the term “fierce” and his fresh, unique design aesthetic.   Along with winning fan favorite, he also won over judges Michael Kors, Heidi Klum and Nina Garcia taking home the $100,000 cash prize, a fashion spread in Elle magazine and a 2008 Saturn Astra.  Following his Project Runway win, Christian debuted his line at Bryant Park and has since been a staple and favorite at New York Fashion Week.  With another Fashion Week in the books, spring 2012 found Christian showing palazzo pants, belted long skirts and striped t-shirts along with elaborate gowns with touches that can be considered classic Siriano.  “It was inspired by a few different things,” he says when asked about the inspiration behind his 2012 collection.  “When I was originally thinking about spring, I really wanted this girl to be kind of cool, lighthearted; I really wanted her to be kind of fresh.  And in researching this, I was looking for anything that was kind of interesting to me.  And I was actually watching this film called ‘Summertime’ with Katherine Hepburn and it’s a beautiful film.  And this one scene where she is in this coral wrap dress and it’s really vibrant and her hair is kind of tousled up and the essence of her in that moment was really beautiful.  And I think that was the whole jumping off point for the story.”  Christian also states that he viewed pictures of sea creatures such as barnacles and sea urchin, and from those pictures he derived inspiration for the color and textures of the collection. 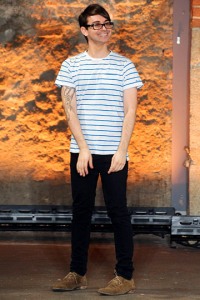 Like most designers that create a fashion empire, Siriano has expanded his talents to include ventures off the runway.  In 2008, he designed a 15 piece collection for Puma as well as virtual prom wear for Gaia Online’s virtual prom.  In December 2008, he signed a deal to design a line of low-cost shoes and handbags for Payless Shoesource which became available in Payless stores in fall 2009.  In 2011, Siriano’s Payless line was expanded. “I’ve been working with them for over three years and it’s been such a great long term collaboration,” he says.  “Some of my fans are quite young and there’s not that many sixteen to twenty-five year-old-girls that can spend over one hundred dollars on a pair of shoes.”  In February 2011, Siriano launched a limited collection for Spiegel catalog, named Christian Siriano for Spiegel.   Siriano was the first designer chosen for the catalog’s designer collaborations line, Signature Styles.

Designers Calvin Klein, Donna Karan, Ralph Lauren and Tommy Hilfiger are all American fashion immortals that started their lines in New York City that have since become billion dollar enterprises. It is still unclear if Christian Siriano will fulfill Tim Gun’s prophecy and ascend to Pantheon of American fashion royalty.  In 2010, he was named one of Crain’s Top 40 Entrepreneurs Under 40, which reported that the designer’s line has brought in over $1.2 million in revenue, so it appears the young prodigy is well on his way.  Another aspect that remains clear is the inspiration he draws from New York City.  “I love when I go to an event and you know people, but you don’t know who everybody is and everyone is such a mix.  There is some girl in vintage and there is some girl that is super glamorous. You get such a range in New York City.  It is so eclectic.  You always see something different and special.”