Actress Meagan Good has displayed her beauty and talent in numerous films including Deliver Us from Eva, Stomp the Yard and Think Like a Man.  Recently she, along with other actors such as Cuba Gooding Jr., Patricia Heaton and Christopher Gorham and pastors such as Craig Groeschel , Erwin McManus , Jonathan Falwell and Miles McPherson, has participated in the latest audio production of the bible.  Directed by actress and director Chip Hurd (who also directed the 2006 audio adaptation) NIV Live: A Bible Experience features cinematic 3D enhanced sound and a musical score courtesy of the Prague Philharmonic Orchestra.  When asked about her involvement with NIV Live, Meagan responded, “As a little girl I’d known Chip and she’s just an incredible person and incredible mentor.  As this project came about she asked me if I would like to be a part of it and I was like of course I would.”

The bible is one of the most read works in the human history with several adaptations published.  The creative team behind NIV Live: A Bible Experience also produced the first audio version of the bible in 2006.  The passages Meagan and the other cast members read were assigned to them.  In this version she portrays Eve, mother of all mankind, but as for her personal favorite passage the 32-year-old actress stated, “My personal favorite is always going to be Proverbs 31 because that is who I aspire to be every day. I put my best foot forward to try to be that woman.” NIV Live: A Bible Experience can be purchased as a 79-disc CD set with a bonus DVD featuring the making of NIV Live, a downloadable digital version with multi-platform access or a mobile app with price points ranging from $19.99 to $62.50.  If you want to see and hear Meagan, you won’t have to wait long; she is co-starring in Anchorman 2: The Legend Continues is set to be released on December 18.  In 2014, she will be reprising the role of Mya in Think Like a Man Too.  And yes FAMERS, I tried to get some scoop for you, but all Meagan would say was, “I will say…that someone gets married.  That’s all I can say or else Will Packer [producer of the Think Like a Man films] will have my head on a platter.”  And none of us wants that.

Just in time for Memorial Day! 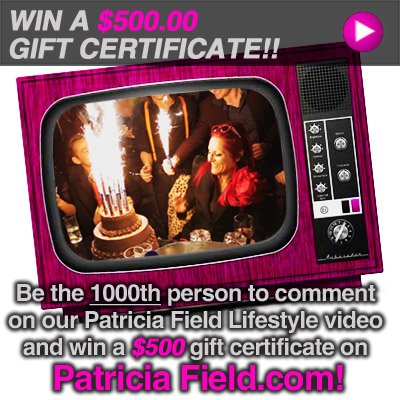 What or should  I say who does The Devil Wears Prada, Sex and the City, Ugly Betty and Mother Goose Rock ‘n’ Rhyme have in common?  If you said Patricia Fields, then you know your fashion trivia!

Patricia Field is a New York born costume designer, stylist and fashion designer.    Her boutique in the Lower East Side is just as legendary as her edgy fashions.

Patricia Field is celebrating the re-launch of her YouTube channel and she wants you to get in on the act. Wanna lil’ Patricia Field in your life…well if you visit the site, you could win the chance to win a $500.00 gift certificate!

Visit the link below, watch the video and add a comment, yep… it’s just that simple.  Happy YouTubing FAMERS!  I might just get in on this one myself.