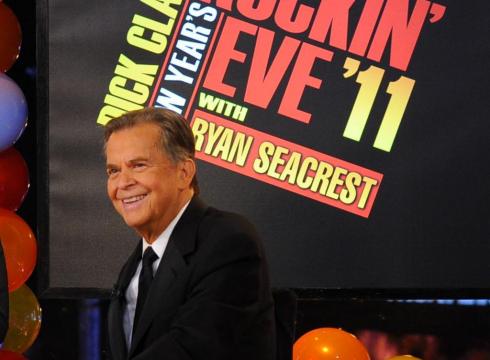 Even before I was granted the privilege of staying up late and bringing in the New Year with my parents, Dick Clark was a part of my life.  Every Saturday we would watch American Bandstand, a weekly event which signified the end of the Saturday morning cartoon shows, toggling between it and Soul Train, depending how the channels scheduled the two music shows.  By the time I got hip to Dick Clark, he had already earned the reputation of “America’s oldest teenager”.  His seemingly ageless face and graceful presence provided the soundtrack and memories of my childhood.  Pyramid was one of my favorite game shows as a girl and the American Music Awards, which he also produced, always kept me glued to my TV screen.  I swear if I had sat any closer, my parents would have experienced a Poltergeist-like scenario as I would have been in the television.

Dick Clark was born in Bronxville, New York, and was raised in Mount Vernon.  After high school he implemented a dream to be in radio by attending Syracuse University, graduating in 1951 with a degree in advertising and a minor in radio.   After stints at different radio stations in New York, California and Pennsylvania, Clark became host of a local show titled Bandstand in 1956.  In 1957, the newly renamed American Bandstand and Dick Clark burst onto the landscape of American pop culture as the show debuted on ABC.  Along with breaking color lines, Clark assisted in transforming rock n’ roll from a musical pariah amongst parents into one of the most popular genres of music.  In 1972, he produced and hosted Dick Clark’s New Year’s Rockin’ Eve.  In April 2004, Clark announced he had type 2 diabetes and in December of that year he suffered a minor stroke, which left him with a speech impediment caused by dysarthria.  Because of this, Ryan Seacrest assisted Clark in co-hosting the annual New Year’s Eve celebration.  On April 18, Dick Clark passed away after suffering a heart attack following surgery.  He was 82.  On April 20, he was cremated and his ashes were scattered in the Pacific Ocean.

Each year, Dick Clark hosted the biggest party in Times Square.  For decades people descended from all parts of the globe to participate.  As far back as I can remember Clark has been a part of me toasting in the New Year – first with eggnog, then with wine – it is unfathomable to believe I will not see his luminous eyes and boyish smile during the last hour of this December 31st.  I guess it is because of New Year’s Rockin’ Eve and American Bandstand  I have always associated Clark with new beginnings and inspiration.  Even his illness couldn’t tarnish his eternal youthful spirit.  He left an indelible impression in music and media, all while being a good person to boot.  I suppose learning that your heroes and people you admire have succumb to their mortal fate is a symptom of getting older yourself.  And while it’s just a fact of life, doesn’t stop it from hurting like hell.  Thank you Dick Clark for all your contributions to media and music, thank you for such an incredible, inspirational legacy – New Year’s Eve won’t be the same without you.