It’s F.A.M.E NYC Magazine’s Anniversary!!! And as a thank you to all my FAMERS, I would like to extend the opportunity to win two tickets to see BECOMING DR. RUTH!

Each comment increases your chances of winning, so comment a lot.  This is quickie ticket giveaway and the winner will be announced November 20, 2013.

So what are you waiting for….comment and tell us how much you love F.A.M.E NYC and win some tickets!

Holocaust survivor, sniper, sex therapist, author, mother of two, widow, grandmother of four all packed in 5-foot-4-inch frame, can anyone say #WOW?  While some sit and contemplate how to get one life going, Dr. Ruth has had several and at 87 this force of fierceness is still out and about every night.  Listen up Millennials, before there was a Carrie Bradshaw there was Dr. Ruth.  When she launched her radio show, “Sexually Speaking”, in 1980, the idea of a woman speaking so candidly about sex was still taboo. Dr. Ruth is a trailblazer, but what led her to become America’s favorite sex therapist?  That journey is poignantly explored in Becoming Dr. Ruth.

The one-woman production takes place in 1997 at Dr. Ruth’s apartment in Washington Heights.  Recently widowed, she is preparing to move and talking on the phone when she realizes she has company (the audience).  Dr. Ruth, colorfully played by Debra Jo Rupp, then breaks the fourth wall to lead the audience through a narrative of the events of her life before we came to know her.  Born Karola Ruth Siegel in Wiesenfeld, Germany, Dr. Ruth was forever separated from her family when her mother and grandmother decided to send her to Switzerland as part of the Kindertransport.  She details the harsh reality of living in that environment while still dealing with the issues of childhood.  At 17, she was a member of the Haganah in Jerusalem serving as a scout and sniper.  In 1950, Dr. Ruth moved to France studying and teaching psychology at the University of Paris.  In 1956, she immigrated to New York City, moving into the same apartment she inhabits today.  And if that wasn’t enough, she divorced two husbands, gave birth to a daughter, married her beloved Fred Westheimer, became a mother for the second time, earned a master’s degree in sociology and completed her-post doctoral work in human sexuality before the name Dr. Ruth became synonymous with sex. The play also chronicles what life was like after she became the most famous sex therapist of the 20th century.

Four-stars usually signify that a creative endeavor has achieved an A+ grade.  Well in my opinion, four stars don’t adequately display how wonderful this production is.  Becoming Dr. Ruth is triumphant – a soul-hooking display of the resiliency of the human spirit.  From the time Debra Jo Rupp acknowledges the audience until the lights dim, spectators are swept-up in a tale so epic Homer would be envious that he hadn’t written it.  The narrative is so engrossing that no other characters are necessary.  Dr. Ruth’s story makes for the quintessential one-woman show. 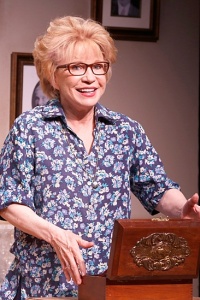 Playwright Mark St. Germain wrote my favorite play in 2010, Freud’s Last Session, and I believe he has done it again with Becoming Dr. Ruth.  To create a character in your head, infuse him/her with a dose of humanity and make him/her relatable to an audience isn’t an easy commission, but the best writers can make the transformation seem effortless.   What is even more difficult is converting a real person into a character. This is St. Germain’s genius.  He can translate a story, real or fiction, of historical figures that preserves their human quality without making them caricatures.   When St. Germain wrote the play, he knew he wanted Debra Jo Rupp to portray Dr. Ruth and he was so right.  Rupp’s performance is magnificent – she nails the amalgamation of Dr. Ruth’s German, Hebrew, French and English accent with the accuracy of a sharp shooter (pun intended).  To say she is a delight to watch is a gross understatement; her presence is its own spotlight.  She fills the stage warmth.

Becoming Dr. Ruth encompasses everything you want in a play – it tells a powerful story with candor, humor and sophistication.  It’s a brilliant artistic representation that mirrors a life that is equally as brilliant.   Many of us have followed Dr. Ruth’s advice, now take my advice…go to the Westside Theatre and see this play!