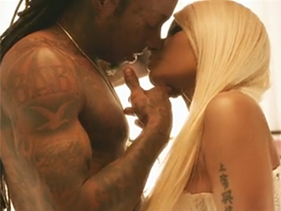 Hate her or love her, Nicki Minaj certainly has the right to crown herself the “Queen of hip hop”.  She has completed feats that no female rap artist ever has and the 30-year-old “Starships” rapstress is only two albums in the game.  Personally, I like to refer to her as the Joan of Arc of hip hop.  But I digress, yesterday she premiered her new video for “High School” on MTV and I don’t know about you FAMERS, but this ain’t like the high school I went to.  The video also featured some racy scenes between Minaj and Lil Wayne.

So without further ado….