March is the season for gusty winds, sort of like the tornado winds that blew Dorothy from Kansas to the mythical Land of Oz.  Fortunately for New Yorkers, Oz has come to us.  French Street Artist Ugly-Kid GUMO will be exhibiting THIS IS OZ-NOTHING MAKES SENSE at the Fountain Art Fair, located on Pier 66, from March 3-6.

F.A.M.E NYC first introduced this artist to you back in November.  Take a look at the video below to catch a sneak peek of GUMO and the Oz he lives in.

A Preview of Ugly-Kid Gumo

To create graffiti is to engage in urban guerilla warfare.  Renegades of refinement, graffiti artists take cold, inanimate slabs of concrete and other disregarded objects from our society and manufacture fleeting masterpieces.   The fact that these works are both illegal and transient is what makes this medium one of the most authentic forms of expression and those who lurk in the shadows of night, spray cans in hand, to partake in this illicit act, mavericks of culture.    In the ‘80s, graffiti art was an extension of hip-hop, a subculture emerging from the Bronx that also fused a particular style of music and dancing.  Street artists also started to become recognized as rising stars in the international art scene – artists like Keith Haring and Jean-Michel Basquiat, who along with Al Diaz created the SAMO Graffiti in the late ‘70s and also signed his early work as SAMO. 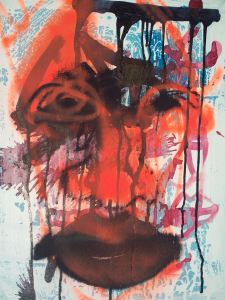 Following along the same vein as these iconic artists is a young street artist from France named Ugly-Kid Gumo.  Gumo was born in France in 1980 near Paris, the same year in which Basquiat began to kill the SAMO legend by writing “SAMO IS DEAD” all over downtown.   Using the raw electricity of the streets as his canvas, Gumo uses his art as a mirror to reflect back to society the Babylonian condition in which it finds itself.  On November 20, I received a slight introduction to the chaos Gumo evolves from when I attended OZ le visage du mal, a single-evening preview of his work.  Using spray paint, photography and other heterogeneous schemes, Gumo related a story that was a stark, unflinching dose of reality.  It was jarring, emotional, pensive and powerful, causing my stomach to stir from the intensity.  Crude faces illustrated on white pieces of paper and posted against a cardboard backdrop exuded the essence of street culture and were reminiscent of Basquiat’s work.  The amalgamation of early ‘90s American and Parisian hip-hop added to the gritty element of Gumo’s chaos.

While walking around the preview, meticulously ingesting all of Gumo’s art, I was ensnared by the soul of the pieces, which may be Gumo’s true intention.  I was particularly attached to the series of faces constructed from scrapings of graffiti Gumo completed.  With these pieces Gumo accomplished a rare feat – he transformed a momentary work of art into a fresh conversation piece.    Another series that captivated my attention were spray painted faces with heads shaped like keyholes.

As I looked through what appeared to be a keyhole into the primitive faces of Oz, I realize these striking images speak. They speak for the same impoverished people that used mattresses as trampolines, cardboard boxes as dance floors, parks as clubs and trains as canvases.  They speak for the youth that carry their discontentment on their shoulders like backpacks.  Oz is omnipresent – it is New York City, Paris or any place where there is a disconnect with certain members of the community, where people are lost and slip through the cracks.  It is there that Gumo finds the chaos and translates it the world.

Adding to the compelling artwork is Gumo’s personal story.  He is not a man that comes from the ghetto, in fact he was raised in the suburbs, but he identifies with a struggle most people choose to overlook in their quest for recognition and riches.  I find his empathy to be extremely admirable.  It also transforms him from a mere artist to a griot, chronicling the history of our time through mixed-media and poetic expressions.  Gumo is represented in New York by the Marianne Nems Gallery.  The preview was only to wet our appetite for a full scale exhibition coming in March 2011.  Gumo’s work transported me back to the New York City of my youth, where the grit was as thick as the humidity in the summertime.  Before Times Square received consumer-driven porcelain veneers and hip-hop lost its soul.  I am eager to see more of Gumo’s work – it is definitely not the same ole shit.