“It has been a very long and arduous process,” Catherine Fellows, Executive Director of Models International New York, said with laughter while describing the procedures the model agency underwent to find the new faces representing Models International.  “We started the fresh faces search months ago, we sent it to media outlets all over the country and we posted it on the web.”

A few months ago I told you about Models International’s Fresh Face Model Search.  Models submitted their pictures and on June 25 the announcement was made.  The fashionable of New York City ventured to Bowery Wine Co., located at 13 East 1st Street, to meet the latest additions to the Models International family.  The winner of Models International’s Fresh Face Search 2010 is Whitney Heleker.  Whitney is a 5’10, Botticelliesque beauty with an athletic frame, pouty mouth, bedroom eyes and a charming disposition.  “Whitney is really someone that is youthful and has a face that you’re happy to look at.  To me she has a great crossover look.  She can do high fashion and she can do commercials as well,” Catherine stated about their one of their newest and freshest faces. 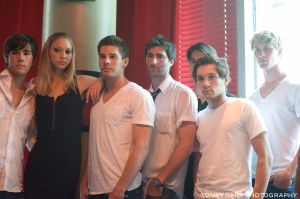 Whitney described the night as “very exciting.”  After seeing the posting for the search on ModelMayhem.com, Whitney submitted for the contest; the rest, as they say is history.  Originally from Idaho, modeling was not a career path she thought about pursuing.  Whitney played sports, varsity basketball and swimming (which served in helping her achieve her healthy body). It was not until traveling to California for college that the idea of modeling became a viable prospect.  “People said to me, ‘Oh, you should model’,” Whitney recalled.  At the time of the event Whitney had just arrived in Manhattan with total support from her family and was anxious to see the Empire State Building. Alongside Whitney, Models International also introduced other male and female models from their Fresh Faces board.  They mixed and mingled with other guests as everyone tasted Italian-styled canapés and sipped on Sobieski Vodka concoctions. 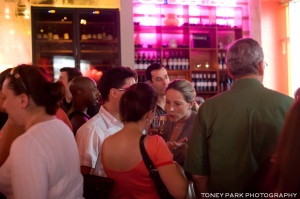 Another fresh face I met that night was Chad Silberman.  Unlike Whitney, Chad did not have to travel very far to get to the Models Internationals office in New York, he hails from Long Island.  “I have been interested in modeling for a while,” Chad admitted as we stood outside the Bowery Wine Co. to take in some of the humidity of a New York City summer evening.  “I came across Models International’s blog and read about the search and a couple weeks later I got an email asking me to come into their offices.”  Chad’s All-American good looks scream to be seen in a Lacoste, Nautica or Polo campaign.  Not just a pretty face, Chad is studying to receive his Bachelor’s in Engineering.  Another interesting fact I learned about Chad is he has a tattoo on the inside of his bottom lip.

Andrienne Kennedy, Director of Models International Women’s board, stated that Models International has completed approximately five model searches in the past.  “It is a really good way to find fresh faces and girls who are not in the industry, but may want to get in the industry and it is a great way to reach out to different parts of the country and find girls who are new to the business,” she stated.  To get the girls ready for their new career, Models International provides their fresh faces with coaching to ensure they receive proper knowledge about the “ins and outs” of the business.  Since beginning the program Andrienne said the fresh face models fare “very well.”  With the new crop of dynamic visages that have been presented we are sure to see some new stars rising from the runways very soon.