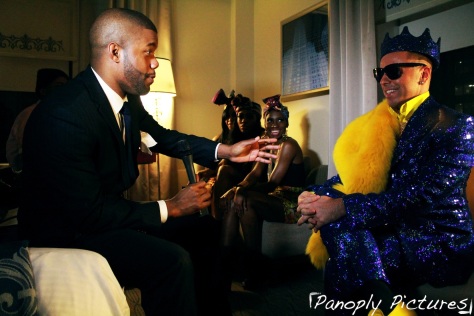 March in New York City is known for two things, gusty winds whipping around skyscrapers and the St. Patrick’s Day Parade.  But on the evening of March 12th, a zephyr blew the trendy and fashionable to Millesime, located on 92 Madison Avenue, for The Luxxx Ball presented by Legendary Damon, American Apothecary and Remy Martin.  Just in case you have not heard, The Luxxx Ball is Legendary Damon’s annual birthday celebration.  And for all you FAMERS in bed by the stroke of midnight, Legendary Damon is a stylist, a high priest in the religion of fashion and the king of NYC nightlife. 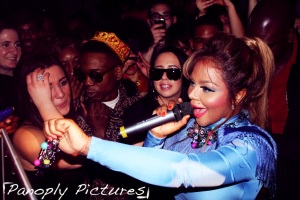 Using the Studio 54 blueprint (a well mixed masala of average Joes with celebrities du jour) Damon has had the NYC party scene on lockdown for over a decade.  His parties are as renowned as his name and this year’s The Luxxx Ball can certainly be added to the pantheon of great events.  Wall to wall there were people trying to do their best to adhere to the invitation’s request “dress to impress the king.”  The VIP was spilling over when the nightlife czar made his grand entrance complete with Kente cloth, head wrapped rose bearers sashaying to the “King’s Motorcade” from Coming to America.  Legendary Damon glittered in royal blue and canary yellow and sported a blue crown.  And who entertained the King, the Queen Bee.  Lil Kim brought the crowd to a frenzy performing her greatest hits as well as a track off her new Black Friday mixtape.  Rapper Unique and Mic Murphy from The System also serenaded sultan of style.  After observing the events of this momentous evening, I have only one comment: It is good to be the king.

8 thoughts on “A Night Fit for the King”