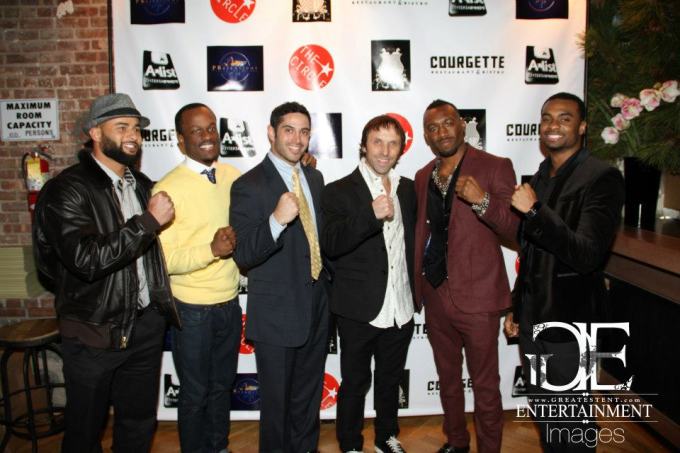 In ancient Rome the celebrities and gladiators of the day provided thrills and chills for the screaming mob at the Colosseum.  In New York, artisans and athletes of today make themselves immortal at our version of the legendary Italian amphitheater – Madison Square Garden – and they’ve been doing so for decades.  Madison Square Garden known as “The Mecca for boxing” has hosted plenty of epic bouts.  On Saturday Austin Trout, WBA light middleweight champion, intends to retain his title and have a break out performance that lives up to the awesome boxing spectacles The Garden is known for.  But before Trout defends his title against four-time world champion Miguel Cotto, he made time to do something essential for all champions – he ate.

On November 28, Trout was the guest of honor at an intimate candlelit meal at Courgette Restaurant & Bistro, located at 204 W. 55th Street.   Courgette, the French word for zucchini, features Mediterranean cuisine with Italian and French twists and has a sexy basement speakeasy that includes a state-of-the-art sound system and karaoke room.  The champ and guests, who included designers, press, entertainers and other athletes, savored on a tasting regale of the restaurant’s staple dishes.  The event was a feast that quenched all the senses and provided a scorching hot alternative to the frigid temperatures outside.

The man of the hour was as cool as a pair of Ray-Bans as he greeted guests and shook hands with an affable flair that is indicative of all great champions.  He stated he was looking forward to today’s weigh-in and admitted he had no intentions of losing his title tomorrow.  If the 25-0, undefeated pugilist’s fight plan is as killer as his style and personality, then he should have no problem shutting up the pro-Cotto mob at The Garden as he hands Miguel his fourth loss.