Robert Frost once wrote, “Good fences make good neighbors.”  But how many of you would jump at the chance to peer past the fence and find out what your neighbors are really like?

F.A.M.E NYC would like to give one lucky FAMER and a guest the opportunity to find out by extending two passes to the dress rehearsal of “THE REALISTIC JONESES” on March 12 at 8 pm.  Written by Will Eno and directed by Sam Gold, “The Realistic Joneses” stars Academy Award nominee Toni Collette, Golden Globe winner Michael C. Hall, Tony Award winner Tracy Letts and Academy Award winner Marisa Tomei.

To enter to win the passes for this exclusive event, all you need to do is answer this question:

What is the name of the film in which Marisa Tomei gave her Oscar winning performance?

The winner will be announced on February 25 at 5 pm.  Despite the mounds of ice littering our sidewalks, spring is coming!  And on Broadway Spring 2014 is shaping up to be one helluva season.  Here’s your chance to become a Broadway insider. Enter this contest! 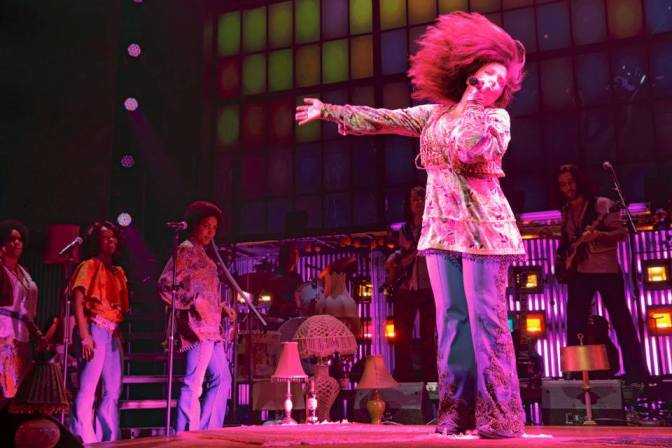 Holy revival Batman!  There is a nightly resurrection going on every night at The Lyceum Theatre.   In an era when rock titans such as Jimi Hendrix and Jim Morrison walked the earth and groups like The Who asked to die before they got old, a little lady from Texas with extraordinary chops offered up pieces of her heart and become just as legendary as the boys –her name was Janis Joplin.

Janis Joplin was born in Port Arthur, Texas in 1943.  She was raised in a cocoon of various musical influences courtesy of her mother and father.  When she finally did spread her wings, she flew to San Francisco in 1963.  She briefly returned to Texas only to go back to California in 1966 to join Big Brother and the Holding Company as their lead singer.  By the time of Joplin’s untimely death in October 1970, she had ensured her legacy as a rock goddess and with her unique interpretation of songs, one of the most recognizable voices ever.

I don’t think the world needed any reminders about the raw power and beauty of Janis Joplin’s voice, but in case it did A Night with Janis Joplin served a stunning aide-mémoire.  This production is a hot rocking time capsule.  Once it starts the audience is shuttled back to the Age of Aquarius with one of its most colorful figures as mistress of ceremonies.

I expected A Night with Janis Joplin to typical a jukebox musical chronicling the highs and lows of Joplin’s life with the musical numbers accentuating the book.  I was pleasantly surprised.  A Night with Janis Joplin is more like a concert and is all about the music, mainly the singers that influenced Joplin’s sound – singers like Nina Simone, Bessie Smith and Etta James.  Even the Queen of Soul was present to do a number with Janis that injected everyone in the audience with the spirit. Mary Bridget Davies is nothing short of phenomenal as Janis Joplin, it’s like she comes from another plane.  For an individual who didn’t get the opportunity to experience Janis Joplin when she was alive, Davies’ performance is awe inspiring. Taprena Michelle Augustine, De’Adre Aziza, Allison Blackwell and Nikki Kimbrough round out the cast of ladies on stage playing The Joplinaires as well as The Chantels, Bessie Smith, Nina Simone and Aretha Franklin –their voices soar to right out of the theater and up to heaven.

A Night with Janis Joplin is a loving tribute to music of the Pearl and the strong, mainly unsung women that inspired her.  There was never a point in the show where I wanted to be contained in my seat, my feet never stopped tapping.  I wanted to sway, shake and move in the aisle and enjoyed watching the audience becoming part of the show and singing along.  Hearing “Me and Bobby McGee”, “Ball and Chain” and “Stay with Me” performed live brought me to tears.   Mary Bridget Davies doesn’t just sing she performs a séance.  A Night with Janis Joplin is a prime example of how music can transport and uplift the soul.  It’s a must see.

The Nance opened April 15 at the Lyceum Theatre.  Starring Nathan Lane, Jonny Orsini, Lewis J. Stadlen, Cady Huffman, Jenni Barber and Andrea Burns, The Nance vividly paints the portrait of the world of burlesque at its zenith as well as the beginning of its demise.  After viewing this production, I can happily report that I wasn’t disappointed.  The Nance is witty, thought-provoking and one of the most complete shows I’ve seen this spring.  If you desire a night at the theatre that offers a little sex, lots of laughter and a provocative narrative, then I suggest you get down to the Lyceum Theatre and say, “Hi, simply hi,” to the ticket agent and get yourself a ticket to The Nance.  And just in case my word isn’t good enough, below are F.A.M.E NYC’s top five reasons to go see The Nance.

Nathan Lane – Nathan Lane is a no stranger to the neon lights of Broadway.  In fact, with productions like Guys and Dolls, The Producers, The Odd Couple and The Addams Family under his belt, Lane is a veteran and a box office draw. In The Nance, he plays Chauncey Miles, a seasoned burlesque performer known for his flamboyant routine.  Chauncey’s high-pitched, double entendres and musical performances are a regular riot until the city decides to crackdown on the lowbrow environment the burlesque world entertains.  Chauncey, a republican, believes it is just political grandstanding until he reluctantly becomes the poster boy for free speech and subsequently for gay rights. Lane steps into the role of Chauncey as if he is placing his feet into the most comfortable pair of slippers.  It is made for him and highlights all the attributes that fans have come to love about watching Nathan Lane on stage or on film.  A true comedian, his timing is impeccable and his delivery of the material truly deserves the standing ovation given by the audience at the end of the show.  What Audrey Hepburn did for the character of Holly Golightly, I believe Lane has done for the character of Chauncey Miles.  He has given the role unmistakable life that will not easily be duplicated.

Douglas Carter Beane – With all the flowers, and some weeds, that sprouted on Broadway this spring, playwright Douglas Carter Beane has created a rare rose.  Beane not only offered audiences a peek into the world of burlesque, he also featured a glimpse of the New York City and the world pre-Stonewall and created a direct line to the issues the LGBT community still face in the 21st century with style and humor.   There is no part of this story that lags; it is a Babe Ruth home run out of the park.

John Lee Beatty – When a production is running on all cylinders, the set design is a crucial element to its viability.   John Lee Beatty’s set design is as vital to The Nance as New York City is to Law and Order.  It is without a doubt the silent character.  His swiveling sets allow the actors to change scenes without switching gears and make the transition between The Irving Place Theatre and Chauncey’s apartment flawless.  The sets permit the audience to ride side-by-side with the cast on a journey back into time courtesy of Douglas Carter Beane’s wonderful script. 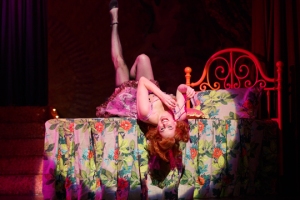 Jonny Orsini – What a cutie pie!  He steams up the stage of the Lyceum Theatre with his nude scene and smile that can be seen in the last row of the balcony.  Orsini plays Ned, Chauncey’s younger, naive love interest.   Chauncey believes picking Ned up would only result in a one night love affair, but Ned’s tenderness uncovers another layer to Chauncey’s cynical New York veneer.  Orsini and Lane create authentic chemistry.

The members of Irving Place Theatre – Chauncey’s act at the Irving Place Theatre aren’t a one man show.  Members Efram, Sylvie, Joan and Carmen help to generate the laughs and raw emotion that make The Nance a smash.  The quirky show business family they produce made me want to hop out of my seat and join the circus.

Individually, the parts of this production are great, but together The Nance explodes with emotive fervor.  It’s an instant classic!  I suggest meeting the cast around the corner of W. 45th Street and checking out a fantastic show.