Spring 2013 is here and despite the flip-flopping weather, it appears not to be going anywhere soon.  Spring always brings with it an air of romance and New York City is a great place to have a fling.  If you already have a significant other, NYC can certainly assist in keeping the spice alive in your relationship and offers a smorgasbord of things to do, places to stay and gastro pubs to pack on calories ( that you can work off later).   A relationship novice only chooses holidays and other special occasions to show affection, but if you want the flame of your love to burn bright you had better stoke to those fires more often.  Date night in New York City is play land of possibilities.  So to all my love-struck FAMERS, this piece is for you.   I’m going to share with you my top five places to go, restaurants and hotels to create an awesomely romantic date any day or night.

Empire State Building – Hey…it worked for Carey Grant and Deborah Kerr and Tom Hanks and Meg Ryan; it could work for you and your mate.  The observation deck of the Empire State Building is indeed a place to spark romance.   Standing in the heavens with the city all around you can render a “top of the world” feeling.  There is no better time to grab your lover for a kiss or to drop to one knee for a sky-high proposal. 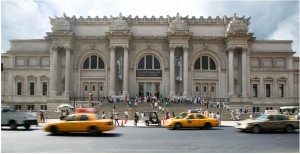 Metropolitan Museum of Art – The Met was the first date for Pierce Brosnan and Renee Russo in the remake of The Thomas Crown Affair.  Crown was a billionaire; he could take his date anywhere he wanted, but for all the rest of the 99 percentile, The Met can provide a modest date.  Priceless works of art, the ability to travel to different eras in history all for a small nominal fee.  Who needs a time machine?  Afterwards, you can take advantage of the closeness of Central Park and spring for a horse and carriage ride.  If you want to put a twist on the old horse and carriage idea, rent a luxury vehicle and cruise the park and city in opulence.

Meat Packing District – In a city filled with trendy spots, the Meat Packing District remains one of the trendiest.  You could take your honey-bunny on a shopping spree.  If you are planning an evening date, go clubbing or go on your own private bar crawl.  You could add a little role play and play the “sexy stranger” game at each new lounge or club you go to.

Times Square – Times Square is the heart of The Big Apple.  Just the luminosity of the place delivers 120 watts of electricity to your body.  You can take your beloved to dinner and a show, take in a little shopping or just sit and watch the show New York City provides via the traffic, street performers and passersby.

Mari Vanna – Russian food and old world romance on the east side.  Oh, and did I mention they make their own Vodka.  The décor is charming.  Even if Russian cuisine doesn’t necessarily strike a chord with your palette, I guarantee that you will score points with the venue as well as the food, which is very comforting.  And if all else fails, you can get your mate drunk – nostrovia lovers!

The Lamb’s Club – Located in Times Square, The Lamb’s Club is an experience that rivals any on Broadway.  Taking American cuisine to the next level, Chef Geoffrey Zakarian and partners have created a cool, yet opulent spot to dine before or after a show.  The menu has a wealth of great selections and scrumptious drinks.  Make sure to make it a 24-karat meal and order the Gold Rush (my mouth is watering just thinking about it).

Courgette Restaurant & Bistro – Yummy is the first word that comes to mind when I think about this eatery, located on W. 55th Street.   Courgette is French for zucchini, but it’s definitely not a vegan spot.  This restaurant fuses Mediterranean, Italian and French cuisine to perfection, if you try one dish make sure it’s the Acquerello Risotto with wild forest mushrooms; it’s to die for.   After you finish dining, take your date downstairs to Courgette’s sexy basement speakeasy, which boasts a state-of-the-art sound system and karaoke room.

Le Bernardin – Eric Ripert…need I say more?  This restaurant is legendary for its chocolate dessert and seafood dishes.  If you are doing a day trip or date that features all of NYC many iconic spots, include this place on your itinerary.

Château Cherbuliez – Speaking of iconic New York spots, no club was as iconic, historic or infamous as Limelight. This church turned club has had a few reincarnations.  Currently, it’s The Limelight Marketplace, towards the back it turns into Château Cherbuliez.  When it was Limelight, walking into this spot was like stepping into another world.  That aspect hasn’t changed.  Stepping into Château is like being whisked off to the south of France.  The décor is impressive and has one of the largest outdoor garden spaces in the city.

W Hotel – Times Square – Dinner, a show, a few drinks, maybe even catch a light night comedy act.  Why end the night at home?  Have a nightcap at W and allow the views of the city to assist you in a night of seduction. It may not be a stage, but I guarantee you will be the star of the show.

Four Seasons – Book a room at this hotel and resort and that could be your date, period end of story.  If the five star treatment is what you’re looking for, you and your mate will find it here.

Gramercy Park Hotel – This hotel is steeped in history.  Afterall, the Kennedy’s stayed here.   The Gramercy Park Hotel has seen its share of marvelous times and some seedy ones, but after the 2006 renovation it recaptured its former glory and has maintained it ever since.  Artist Julian Schnabel and British architect John Pawson have created a masterpiece.  It remains one of the coolest, chicest places to stay in the city.

Crosby Street Hotel – SoHo is one of the many artists’ neighborhoods turned chichi in NYC.  Elegant and eccentric, this hotel serves a taste of London with a New York twist.