When it comes to love stories, none is more well-known than that of Juliet and her Romeo.  William Shakespeare literally wrote the book (or should I say play) on the notion of star-crossed lovers.  The adaptations of this classic are endless, yet the public never tires of the story of love gone awry.  So it goes that after 36 years, William Shakespeare‘s Romeo and Juliet has returned to the stage of the Richard Rodgers Theatre. 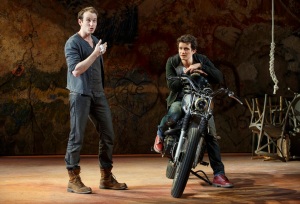 Director David Leveaux’s version of Romeo and Juliet takes Shakespearian English and injects it into modern setting.  Another added twist to the original plot is the subject of race – the Montagues are a white family and the Capulets are black.  Hollywood hottie Orlando Bloom and Broadway sensation Condola Rashad play the young, ill-fated lovers.  All these elements should’ve have produced results that were more explosive than a NASA rocket launch to the moon.  Instead, it was more the equivalent of high school chemistry nerds experimenting after class – yeah; there was a little smoke, but no real fire (except for the random bursts of fire on stage).

Although I wasn’t expecting Romeo and Juliet to declare their love on Facebook, I also didn’t expect the term ‘modern’ to be interpreted in such a banal fashion.  The set, which consisted of a ginormous bell, an elevated plank of wood for a balcony, and a wall that contained a Renaissance secco, was uninspiring and a poor match for the lush verse of one of William Shakespeare’s greatest works.  The first time Orlando Bloom appears on stage he is riding a motorcycle, and while that might be modern it is also clichéd.  At the Capulet’s soiree, I thought the choreography would carry an element of hip-hop or krunking, something other than the interpretations of African dance that were exhibited on stage. The nurse walking a bicycle to deliver a message to Romeo and the parkour climbing of the graffiti-ridden mural does add a nod to a more modern era; however these devices failed to deliver on such a promising idea. 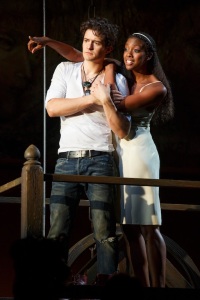 The cast seem to hurry through the dialogue as if they were just trying to get it over with.  Shakespearean English is a mouthful, literally, but the pace was so rushed that some of the beauty of Shakespeare‘s poetry was lost in this interpretation.  While Orlando Bloom and Condola Rashad certainly looked as if they had the potential to rival the flames that occasionally appeared on stage, their scenes together were undersupplied of the heat necessary for me to believe that these two would rather die than live life apart.  Brent Carver, Christian Camargo and Jayne Houdyshell’s portrayals of Friar Laurence, Mercutio and the Nurse were an absolute pleasure to watch and brought balance to this production.

Director Baz Luhrmann attempted a modern interpretation Romeo and Juliet on screen in 1996, back when I thought modern versions of Shakespeare were a sacrilege, and it actually became one of my favorite depictions of this classic love story.  Perhaps Leveaux should’ve taken a few notes from this film.  After 36 years, this Romeo and Juliet ascended to no grander heights nor did it plateau to a great theater low.  All and all it was steady and flat, just like the boards of the balcony – wooden and just plain regular. 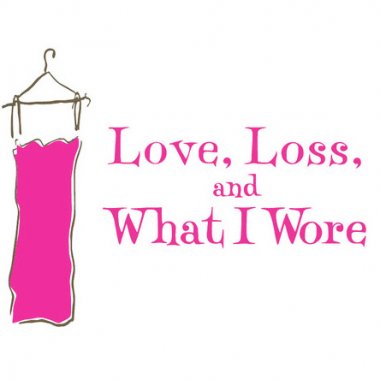 The pair of jeans I wore when I went roller skating and met the worst mistake of my life…the black suit that I have worn to every funeral since I was 25…the denim jumper I wore when I got my ears pierced at the age of 12…the navy blue straight leg silk pants with embroidered baby’s breath flowers I wore on my first overnight date with the man that taught me what true love really meant… all articles of clothing cloaked in memories.  It is true that women cling to the clothing they wore as events fill the chapters in the books of our lives, after all what’s a story without the accessories that give it vivid detail.  This notion is brilliantly and hilariously explored in the off-Broadway production of Love, Loss and What I Wore playing at The Westside Theatre.

Based on the best-selling book by Ilene Beckerman (and adapted for the stage by Nora and Delia Ephron) Love, Loss and What I Wore is a collection of stories performed by an all-star rotating cast that has included Rhea Perlman, Rosie O’Donnell, Rita Wilson and Tracee Ellis Ross.  Each cast performs in four week intervals.  The March cast stars Didi Conn, Fran Drescher, Jayne Houdyshell, Carol Kane and Natasha Lyonne. The play starts and ends with Gingy’s Story with other narratives woven in between.  The cast, dressed in black, sit and deliver the monologues. The set is a tapestry of dresses changing in color. 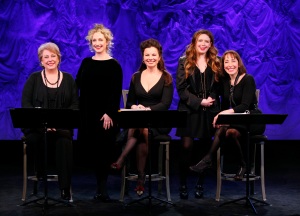 The play covers the full gamut of emotions from a fashionable perspective.  At times I was bursting with laughter and at others I found myself fending off the lump forming in my throat.  It even covers topics like the frenzy women experience when trying on outfits in the dressing room, the obsession with being fat or thin, the hell women put their feet through for a pair of sexy stilettos, all topics that drive women schizophrenic.   Other stories are more personal like Boots, an anecdote about neglect, even fashion icon Madonna was paid homage.

Beautiful, touching and filled with humor Love, Loss and What I Wore intimately tell tales that any woman can relate to and provide a little insight into a woman’s mind for the men sitting in the audience.  In fact, my greatest confirmation that this play is a must see was provided by the man that accompanied me.  This is a man that I thought had the inside track on women, but to my surprise he left the theater enlightened.  Mental note, the plum dress and limited edition patchwork Timberlands I wore when I helped a man from Mars learn more about the planet Venus.  A new memory has been created.