The Temptations proclaimed, “Poppa was a rolling stone.”  Blues maestro Muddy Waters told folks that he was a rollin’ stone.  But little did he know when he recorded that tune for Chess Records in 1950 that the title would be the moniker for one of the most iconic and successful groups of the 20th century.  Known as the first bad boys of rock ‘n roll and complete with a “g” on the end, The Rolling Stones formed in 1962 when then guitarist and founding member the late Brian Jones christened the name while setting up a gig.  Little did he, Mick Jagger, Keith Richards, Charlie Watts, Bill Wyman or Ian Stewart know that they would help to cement the British Invasion of the 60s as well as become some of the architects of rock ‘n roll.

Fifty years later, amid a few changes in bandmates, The Rolling Stones are just as relevant and popular as they ever were.  And as the band and their throngs of fans worldwide commemorate the legacy of music The Rolling Stones has created, it was Porter Contemporary that had me in its sway.  Last Thursday the gallery gave its own homage to the group that ranked number 10 on Billboard’s Hot 100 Top All-Time Artists when it debuted, A Rolling Stone.  The exhibition is not only a celebration for the 50th anniversary of The Rolling Stones,  it also inspired by the proverb, “A rolling stone gathers no moss,”  (a sentiment that  perfectly exemplifies the career and members of The Rolling Stones).   Displayed in A Rolling Stone are the works of Jason Bryant, Jennifer Murray, Johnny Romeo, Adam Normandin, JaH-HaHa and Naoto Hattori.  The show is concise and cohesive; the 10 pieces selected for the exhibit are a beautiful representation of the individual artists’ style as well as the theme of the show.  JaH-HaHa’s paintings feature a young Mick Jagger and Keith Richards atop sheets of music.   Jason Bryant created works based on The Rolling Stones’ iconic album Sticky Fingers, while Jennifer Murray’s work showcased the proverb.

The merging of music and art has always been a particular source of inspiration and enjoyment for me.  Wild horses couldn’t drag me away from seeing this exhibit, considering that I’m a huge admirer of The Stones.  Well curated, reflections of each member’s personality are inherent throughout the space.  But out of all the members, A Rolling Stone reminds me most of Charlie Watts, understated but with a driving back beat that is intrinsic and entrancing, A Rolling Stone will be on exhibit until May 26.  I recommend going to see it; I guarantee you will leave satisfied. 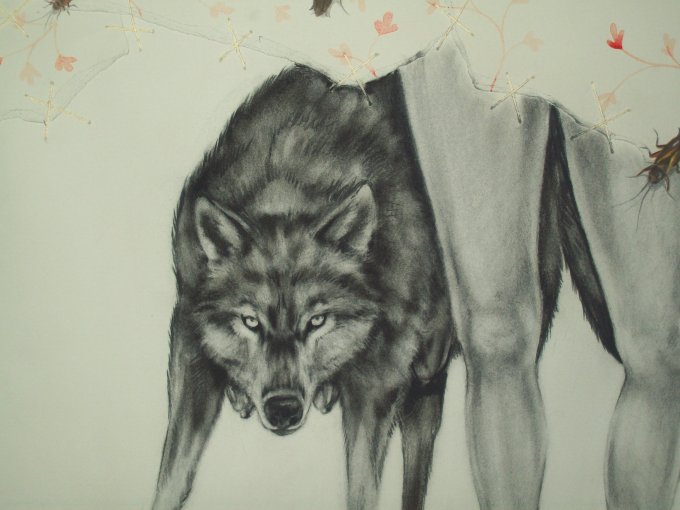 As a small girl I kept my face in books (perhaps that is why I am writer today). Reading to my mother while she made dinner was one of my favorite pastimes.  The XX chromosome dictated my reading selection and I always seemed to fancy tales that were epic in scale, took place in a land far away and had at least one damsel in distress. Not only did the words enrapture me, but the illustrations kept me fascinated as well.  In the myths and fairytales I read as a child, the wolf always played an essential role.  In Little Red Riding Hood the wolf was a cross dresser that had such an obsession with the girl in the crimson cloak that he slaughtered her grandmother and pretended to be her in an effort to get close to his target.  In ancient mythology, a she-wolf suckled twins Romulus and Remus.  Her milk-filled tits fed the starving babies that were abandoned and left to die.  She was their first foster mother, and as men the twins would become known as the founding fathers of Rome. 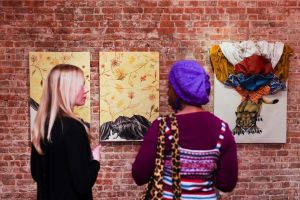 Jennifer Murray has her own story with the she-wolf.  As we stood in front of one her creations last Thursday, she revealed to me the catalyst that manifested into the furry siren.  While in college, Jennifer was experiencing circumstances that required a Waiting to Exhale moment.  When she finally had the opportunity to release, a wolf was delivered.  Further developing the seed that had been planted long ago, Jennifer brings the mysticism and allure of the she-wolf and cougar that has been skulking in our social conscious to the surface in Displaced Fables/Damaged Dreams, her first solo exhibition.   Displaced Fables/Damaged Dreams is an imaginative exploration of the female mystique and its multiple perceptions.  Using charcoal sketches on stretched paper, mixed media canvases and hanging installations, Jennifer balances the fierceness, femininity and fragility of these creatures with great detail and perfect symmetry.   With baroque fabrics, flowery patterns, wallpaper with foliage and yarn she literally weaves a tapestry of visual anecdotes that create a new vocabulary for women. 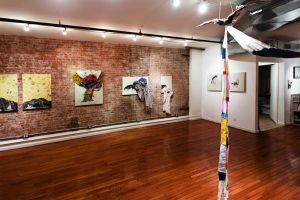 With “The Queen/Bitch Diptych” Jennifer presents the face of two she-wolves, their necks surrounded with fabric like a Medici collar.  The canine lassies hang side by side one looking stoic and magnanimous, the other is tempestuous with snarling fangs.  “White Drawing I” displays a she-wolf haphazardly suspended in white sheets, perhaps the colorless cloth is preventing her from moving or could be removing her from a perilous encounter, thereby becoming her saving grace.  “Decoy Triptych” depicts a wolf straddling a sheep and a sheep mounting a wolf cleverly exposing the facades we flaunt when hiding our true selves. What I found particularly interesting about this piece were the beleaguered expressions of the mounted animals, they reflect the burden of constantly having to carry a disguise.

I first became acquainted with Jennifer Murray and her work at the last year’s Affordable Art Fair.  Upon first glance I knew I would like to see more of her creations.  In total, I was extremely impressed with Jennifer’s initial introduction to the New York City art scene.  Displaced Fables/Damaged Dreams achieved its goals in positioning the viewer in fragmented narratives and dreamlike visions allowing us to decipher how textile flying machines, birds, wolves and cougars related to our human experience.   As I toured the exhibit, I kept returning to “Spiker,” a drawing of a cougar with bold material covering her back.  She was crouched, her front paws resembling a pouncing stance.  Her eyes were sexy, determined and primal.  Looking at this totemic symbol of womanhood I was reminded that within me and every woman there is a little girl playing dress up, a battle-axe ready to strike, a wolf ready to howl at the moon and an empress ready rule.  The trick is harmonizing these characters in the story of our lives as effortlessly as Jennifer composed the scenes of this exhibit.

Displaced Fables/Damaged Dreams will be on display at Raandesk Gallery, located on 16 W. 23rd Street until March 5.